Verwey has served as vice-president of KAP since 2018, and won the election at KAP’s annual meeting over fellow incumbent vice-president, Jake Ayre, in the organization’s first contested election for president in several decades.

Speaking with RealAgriculture prior to KAP’s annual meeting this week, Campbell said he’s been reflecting on his time as the organization’s president.

While acknowledging some challenges, Campbells says he’s proud of KAP’s accomplishments, including the province’s move toward removing the education tax on farmland, online delivery of the environmental farm plan program, the exemption of farm fuels purchased through cardlocks from the federal carbon tax, and progress on federal legislation (Bill C-234) that would remove the carbon tax from grain drying and heating barns if it receives final approval from Parliament. 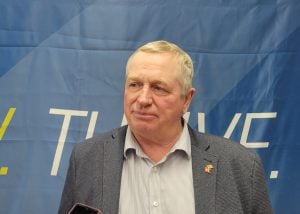 “I’m really proud of the accomplishments, and we’ve accomplished quite a bit. I’m not sure everybody’s aware of them, and that’s part of it, but I know that I feel I’ve represented the industry for the benefit of everybody in Manitoba,” he says.

As for his future, Campbell says he’ll likely still be involved in farm policy, but that he’s planning to focus on the “four Fs.”

“I got a farm that needs looked after. I’ve got a few projects that haven’t been dealt with and that part of it. And I want to have some fun. I’ve got to explore new frontier, you know, do different things. Maybe travel is one of them. And I have a family that I haven’t spent enough time with,” he says, tearing up. “It’s pretty huge commitment, and my family needs my time…”

Campbell, who raises purebred cattle and grain farms at Minto, MB, was appointed president of KAP in July 2018 when Dan Mazier stepped down to seek the nomination for the Conservative Party of Canada in the riding of Dauphin-Swan River-Neepawa.

Jake Ayre, who operates a grain farm and seed business near Minto, and Kevin Stott, a grain farmer from the Niverville area, were nominated and acclaimed as vice-presidents for 2023 at KAP’s annual meeting, which continues on Wednesday.