Big Equipment Co., based at Havre, Montana, has announced plans to bring back its well-known Big Bud tractors.

Working in partnership with Rome Agricultural and Construction Equipment in Cedartown, Georgia, the company is planning to release the new HD Big Bud in March at the CONEXPO-CON/AGG International Construction Trade show at Las Vegas.

Around 500 Big Bud tractors, known for having the highest horsepower on the market, were originally built in Montana from the late ’60s until the early ’90s.

In an announcement shared January 16, Big Equipment says the new 640 Big Bud will feature the following:

“One of the primary objectives of this project is to provide a tractor that has components that can be repaired by farmers, general mechanics or dealerships without restrictions,” the company says.

“Throughout the agricultural industry there has been an increased demand for tractors with components and parts that are accessible to individuals, rather than limited availability/access through manufacturers and dealerships – the industry standard at present is frustrating for many people as they don’t have the right to repair and are instead confined to a particular manufacturer or dealer for repairs, parts and maintenance.” 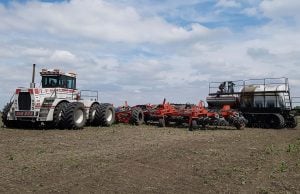 While the Big Bud brand is known for its simple design, any new tractors will have to meet Tier 4 emissions standards. According to the CAT website, the standard C18 engine comes with a selective catalytic reduction (SCR) system, with capacity for 93.7 litres of diesel exhaust fluid (DEF.)