Cover cropping — and then planting into that green cover crop in spring — has become more common in pockets of the U.S. and Canada over the past decade, but the adoption rate has tended to be slower in more northern areas with short or dry fall seasons. These also happen to be areas where tillage is often deployed to help warm soils in spring.

As part of this Soil School episode we head to a windy field day near Barrett, Minnesota, and speak with Jodi DeJong-Hughes, extension educator with the University of Minnesota, about the benefits and what’s known about “planting green” in colder North American climates. (Scroll to the bottom for the video)

“We’re looking at keeping the soil covered, and building soil health, getting better soil structure. Another thing that it can do is for carbon — if you want to go into the carbon markets, going with planting green or no till can be very beneficial and you can get paid for it,” she explains, noting there are also potential benefits when it comes to traffic-ability, water infiltration, weed suppression, and as a livestock feed source. 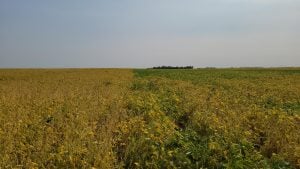 When it comes to reasons why cover crops are not grown, “it’s too cold here” and cost of changing equipment are some of the common reasons DeJong-Hughes hears from producers. “So we have to make it easy, where it can fit into something they’re already doing out in the field,” she says.

For corn and soybean rotations, rye is a common cover crop option, since it can survive cold winters, following corn. When to terminate that rye crop and how much residue is too much are some of the variables DeJong-Hughes and others are analyzing, as demonstrated in the rye termination timing field trial featured in the video below.

“Some years, you may not get the right growth, but I think we’re at the point where it’s not going to hurt yield,” she says. “And we’re also learning how much residue you can have out there, how much rye growth before you do start affecting your crop. And as we get better and better at that, it will be be easier to implement it and give really good advice to farmers.”

Check out the video below featuring Jodi DeJong-Hughes speaking about the move toward more “planting green” in the northern U.S. and Canadian Prairies with RealAgriculture’s Kelvin Heppner: