Fertilizer pricing and supply continues to occupy the mental space of farmers across North America. There are still as many questions about the future of fertilizer prices as there have been since they skyrocketed following the summer of 2021. Supply chain issues and the war in Ukraine have created volatility, and many are watching the influence of European natural gas prices on the global fertilizer market, as natural gas is a critical feedstock for producing nitrogen fertilizers — NH3, urea, UAN and ammonium nitrate.

Note that above I said European natural gas and not North American-priced natural gas is what we should be following. Even though NYMEX-traded natural gas has almost tripled in the last twelve months, this is not what fertilizer analysts such as Josh Linville, of StoneX, are watching right now. It is the Dutch TTM contracts on the ICE Endex that are creating supply concerns globally and could be even labelled the first black swan event of the 2023 crop year.

Typically, the Dutch TTF (the indicator we use most often for production there) is in the single digits in an MMBtu equivalent price. Today, those prices have spiked to over $90, which has caused many production plants in Europe to announce short-term plant closures, according to Linville.

StoneX estimates that at $90 MMBtu, it is costing approximately $3,000 to produce a single ton of NH3 and the global fertilizer market is nowhere near that price, which is causing European plants to go offline. Rather than produce at a loss, fertilizer-makers are halting production to stop the financial bleeding.

With Russia running the Nordstream 1 pipeline at a fraction of its capacity due to maintenance and what many have described as “weaponizing” of gas supplies, traders are very jittery, enabling volatility.

Additionally, European countries have been filling natural gas storage to ensure supply for winter as the uncertainty on Russia’s next moves continue. With no one having a clue on how Putin will handle a potential frozen Europe, the angst is high on natural gas supply and prices. Russia has already halted natural gas shipments to Denmark, Finland, Bulgaria, the Netherlands, Poland, and Latvia and reduced supplies to Germany for not acceding to its demand for gas payments in Russian rubles, according to reports. 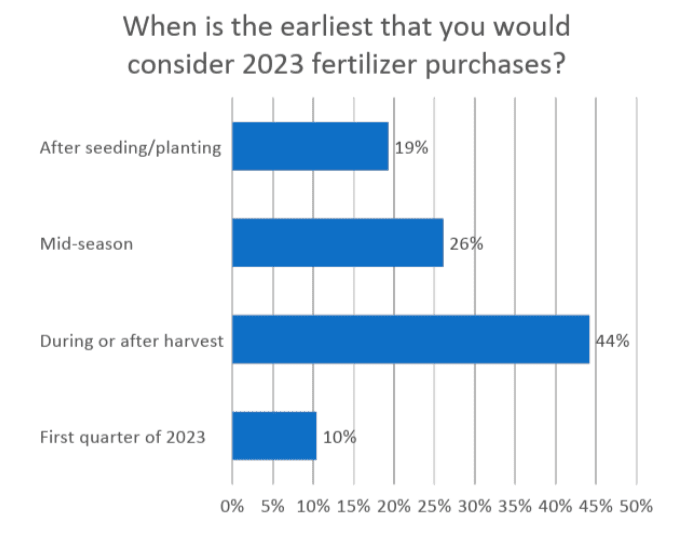 Back on the farm, farmers are coming to grips with relatively high-priced nitrogen currently and the 2023 planting season a short eight months away. For the 2022 crop, buying earlier was the correct decision, but that was before Russia’s invasion of Ukraine.

On RealAg Radio this week, Scott Perkin of Elgin Manitoba stated that he had purchased 100% of his 2023 nitrogen needs over the last month based on recent pricing activity. He mentioned that the rise in natural gas prices was a “tertiary” variable but not the reason to go all in.

According to a March 2022 survey by RealAgristudies (see chart), around 45 per cent of Canadian farmers said they would consider purchasing fertilizer for the 2023 season by now, before harvest. It is difficult to know how many have decided to buy earlier or pushed the decision back.

Linville believes that as long as European production is in jeopardy, that European natural gas prices will remain the focal point of the global nitrogen market. With nitrogen having a global price, lower natural gas prices in North America alone will not keep nitrogen prices capped domestically.

I have been saying all of 2022 that the most difficult decision for the 2023 crop for farmers will be when to purchase fertilizer, and with this black swan event, that decision will only get harder.