Nearly 700 thousand acres are still unseeded in Manitoba, according to the provincial agriculture department.

In its June 28 crop report, Manitoba Agriculture says more than 150 thousand acres were planted after the final crop insurance seeding deadline on June 20, when it was estimated there were over 880 thousand acres still unplanted due to excess moisture.

The unseeded area will likely be the province’s largest since 2014. 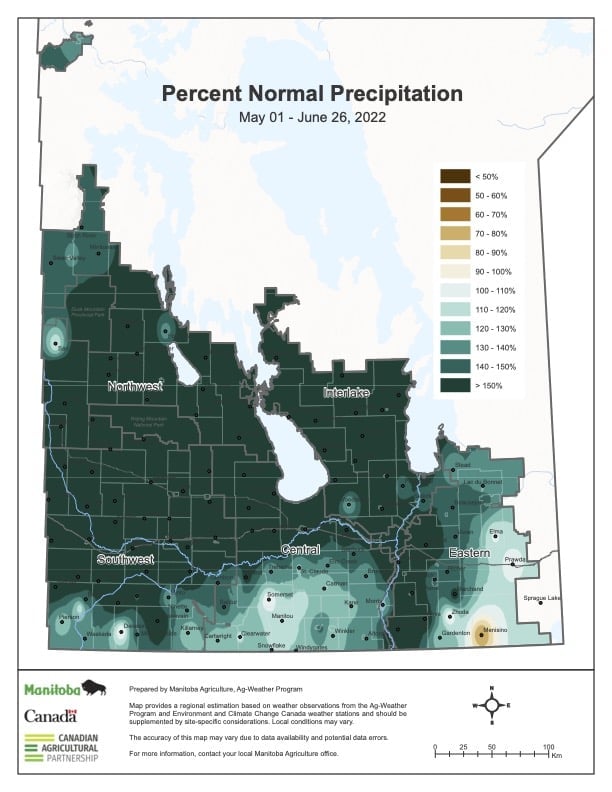 Following record snowfall during winter, most of Manitoba’s farmland has received more than 150% of normal precipitation since May 1. (source: Manitoba Agriculture)

Most of the unseeded land is concentrated in the northwestern Interlake, along Lake Manitoba, in the Austin-Gladstone-Portage area, and adjacent to the Red River.

Manitoba farmers have also had to resort to broadcast seeding in many cases, with Manitoba Agriculture estimating up to 15 per cent of canola acres in the province were broadcast seeded. Some of the seeded acres have since drowned or rotted due to heavy rains (as pictured above.)

Statistics Canada will be issuing its updated crop acreage estimates, including summer fallow area, on July 5.