University of Guelph weed scientist Dr. Peter Sikkema and his research team have now confirmed waterhemp resistance to Group 27 herbicides in the province. He shared the news earlier this week during a Ridgetown/Simcoe virtual agribusiness breakfast meeting.

The latests findings mean there is now five-way herbicide resistance to the weed (Groups 2, 5, 9, 14 and 27 herbicides) in four Ontario counties — Essex, Kent, Lambton and Elgin. “It sure isn’t a localized problem and there are individual fields that will have biotypes that are resistant to five different modes of action,” says Sikkema.

Waterhemp resistance now stretches from Essex County, adjacent to the Michigan border in the southwest of the province, to Glengarry County, at the Quebec border. Overall, there are seven counties with Group 27 resistant waterhemp. 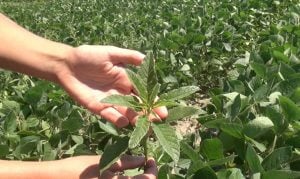 Glyphosate-resistant waterhemp was first discovered in Lambton County in 2014.

In soybeans, Sikkema’s research reveals that the average yield impact of waterhemp is 43 per cent, but he has documented losses of up to 93 per cent in the highest populations observed in Ontario. Similar yield losses have been observed in corn.

How can growers best combat the impact of increasing waterhemp resistance? “I would like to impress upon everyone the importance of two-pass weed control where you start with your best soil-applied herbicide and then manage weed escapes if you have them,” says Sikkema. “I think that’s the program we should be promoting to all corn and soybean growers in the province.”