Hi there! Nice to meet you. I’m Brittany, the newest member to join the RealAg news team.

I was born and raised in southern Alberta, however, I’ve happily called west central Saskatchewan home for the past four years and look forward to being the Saskatchewan field editor for RealAgriculture.

I grew up in Alberta with my mom, dad and older sister, on what we joked was “Old McDonald’s Farm.” We had everything from horses, cows, pigs, ducks, sheep and at one point, several hundred rabbits… but that’s a story for another time. 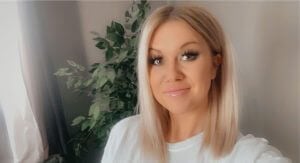 Between our own farm, helping my dad on the ranch he worked at, and going down the rodeo road with my sister, life was always eventful and taught me numerous things that I’ve carried throughout my life.

There’s no denying it, though, both Saskatchewan and Alberta carry their own sense of pride and will tell you all the reasons why their province reigns supreme. However, having lived in both, I can tell you they are equally rich with amazing people, opportunities, and of course, both play a vital role in the Canadian agriculture industry… but Lethbridge’s wind is worse…

Since my time on the family farm, I’ve discovered my passion for writing, which has led me to my career in broadcast journalism. After attending the Digital Communications and Media program at Lethbridge College, I went on to work for Golden West Radio. Starting with the news team there, I quickly jumped at the chance to host my own radio show and then held the role as program director for the last two years before joining the talented people here, at RealAg.

I look forward to meeting as many of you as I can. With any luck it will be in person now that we are able to start rubbing elbows again, or at the very least through social media (@RealAgBrittany on Twitter).