The federal government has published its plan detailing expectations of carbon emissions reductions by 2030, by sector. This first of many Emissions Reduction Plans (ERP) sets out what each industry will be required to achieve under the climate plan to get Canada to net zero emissions by 2050.

In a lengthy technical briefing Tuesday afternoon, several Environment and Climate Change Canada staffers answered questions regarding the nearly 275-page document, though all were centred on oil and gas, and the emissions cap of that sector.

But the document itself covers seven industries: oil and gas, transport, buildings, electricity, heavy industry, waste, and agriculture. The goal is an ambitious target to reduce total emissions to approximately 40% below 2005 levels.

Most of the attention is on the government’s proposed cap on total emissions from the oil and gas sector, however there are plenty of other key points to ponder, including mandatory and term targets for electric vehicle sales, nature-based solutions (i.e. tree planting), and a significant leadership fund for Indigenous peoples of Canada.

The entire plan is earmarked to cost about $9.1 billion, though the full costing of today’s announcement doesn’t equal that number, it was also pointed out. Some planned projects and funding will be revealed in the 2022 budget, a spokesperson says. That budget is expected April 7, 2022.

The $9.1 billion, the government says, reflects “economy-wide measures such as carbon pricing and clean fuels, while also targeting actions sector by sector ranging from buildings to vehicles to industry and agriculture.” 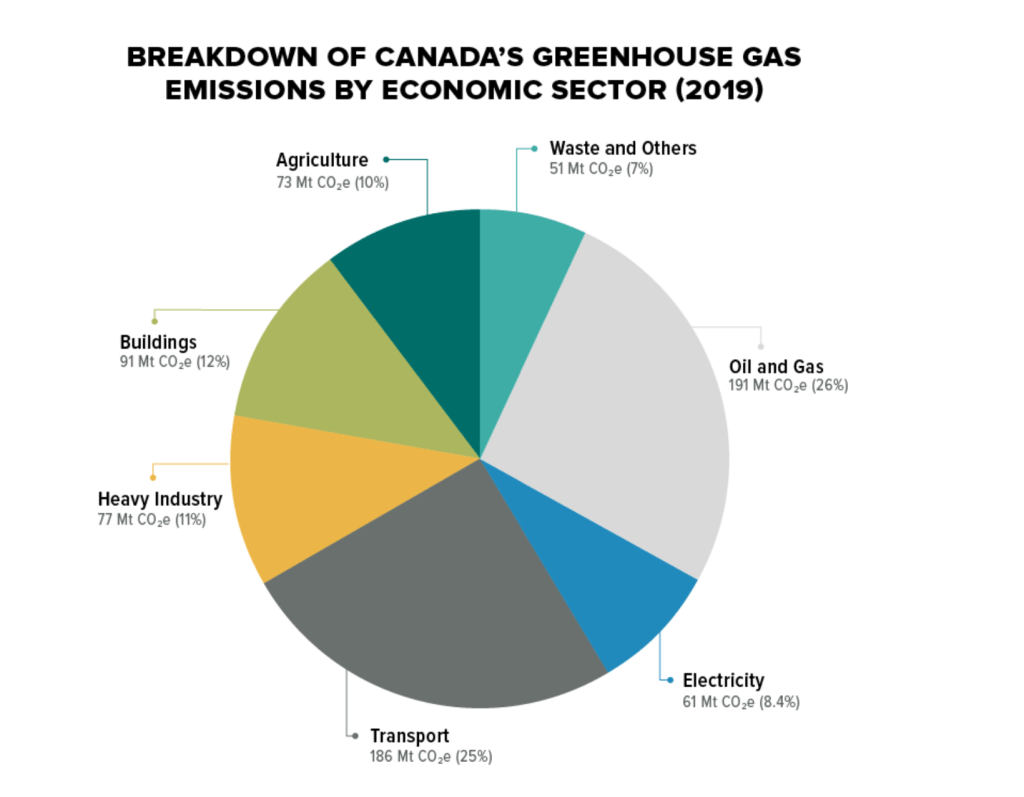 While this isn’t the first climate action plan (or target) a government has published, ECCC says that progress under the plan will be reviewed in reports scheduled for 2023, 2025, and 2027.

As of now, the government has committed more money to existing climate action initiatives specific to the agriculture sector. Included in today’s announcement is a total of:

There will be incentive for all industries to develop and adopt clean technology on the way to net-zero emissions. This includes developing a carbon capture, utilization, and storage (CCUS) strategy; introducing an investment tax credit to incentivize the development and adoption of this important technology; and investing $194 million to expand the Industrial Energy Management System to support ISO 50001 certification, energy managers, cohort-based training, audits, and energy efficiency–focused retrofits for key small-to-moderate projects, the government says.

In addition to the $900 million for agriculture-focused projects, $780 million will be dedicated to the Nature Smart Climate Solutions Fund to deliver additional emission reductions from nature-based climate solutions. The fund supports projects that conserve, restore, and enhance Canada’s wetlands, peatlands, and grasslands to store and capture carbon.

“To stimulate demand for other projects across Canada that reduce GHG emissions, sequester carbon, and generate economic opportunities, Canada will continue to develop protocols under the Federal GHG Offset System, including for projects that focus on nature-based climate solutions,” the document reads.

There will certainly be some overlap between waste management funding and agriculture, as well.

What’s clear in this document is that time is at the forefront of many of these discussions. The plan makes reference to there being only “eight growing seasons remaining until 2030,” a nod to the potentially monumental task ahead.

But the document isn’t very clear on how many tonnes of emissions each policy or funding envelope will result in, nor if participating in these funding projects prevents farmers from also participating in carbon exchanges. In truth, there is very little discussion or mention of carbon trading or carbon credits at all.

Farmers will be provided incentives to adopt on-farm practices such as rotational grazing, cover cropping, regenerative agriculture, nutrient management, manure management, and agroforestry. Going further, the government specifically points out that the next Agricultural Policy Framework will be constructed with environmental considerations at its core.

You can read the entire Emissions Reduction Plan document, here.