Editor’s note: This article has been updated several times, with quotes from a statement issued by Buhler Industries on Thursday morning, details regarding new sanctions announced by the Canadian government Thursday afternoon, and quotes from Member of Parliament James Bezan.

Buhler, which makes Versatile tractors and Farm King equipment, is majority-owned by Rostselmash, based in Rostov-on-Don, Russia, near the eastern Ukrainian border.

The Russian farm equipment manufacturer acquired an 80 per cent stake in Buhler in 2007, and increased its ownership share to 97 per cent just two months ago, buying out the remaining shares held by company founder and namesake John Buhler in December 2021.

“Russia’s actions will be met with severe consequences,” said Trudeau. “…we will continue working closely and quickly with NATO and our allies to collectively respond to these reckless and dangerous acts, including by imposing significant sanctions in addition to those already announced.” 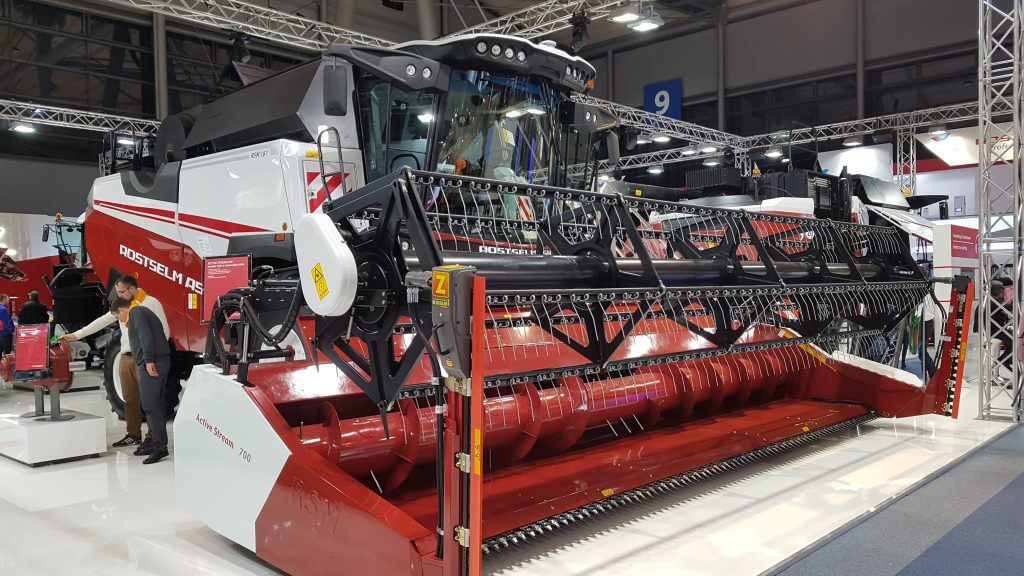 A Rostselmash combine on display at the Agritechnica farm show in Germany.

Trudeau announced the second round of sanctions against Russia Thursday afternoon, including restrictions against 58 individuals and entities who are close to Russian president Vladimir Putin, and the halting of all export permits, which will likely impact Canadian machinery exports.

The Canadian government has previously considered actions against at least one of Buhler’s directors in response to Russian advancements in Ukraine.

Konstantin Babkin, an executive with Rostselmash who has been a director on Buhler’s board since 2007, is also the leader and co-founder of the Action Party (sometimes translated as Party of Business) in Russia, which is known to be friendly with Putin and the Kremlin.

Buhler’s board chair Dmitry Udras and CEO/director Yury Ryazanov, are reportedly members of the Action Party as well.

Babkin posted a party statement on his social media accounts earlier this week supporting Putin’s decision to recognize the independence of the Donetsk and Luhansk regions of Ukraine.

In 2014, at the urging of Manitoba MP James Bezan and the Ukrainian-Canadian Congress, the Canadian government contemplated sanctions against Babkin after he publicly voiced support for Russia’s invasion of Crimea.

“I’m certain that (Buhler’s Russian directors) will be seriously considered again as targets for Canadian sanctions after Putin’s brutally violent invasion of Ukraine on Thursday morning,” said Marcus Kolga, senior fellow specializing in Central and Eastern European politics with the Macdonald-Laurier Institute, in a statement shared with RealAgriculture Thursday morning.

“Large Russian corporations, and the oligarchs who own them, are allowed to operate only by the consent of Vladimir Putin and his officials. As such, oligarchs and their companies operating in Canada should be considered as tentacles of the Putin regime, and should be treated accordingly,” said Kolga.

“These Russian oligarchs who are supporting the despot Vladimir Putin and his barbaric attack on Ukraine will pay a price. Their business interests and other assets here in Canada could easily be frozen, and they could be banned and sanctioned from entering Canada,” said Bezan, who is vice-chair of the Canada-Ukraine Parliamentary Friendship Group.

Bezan noted there are even suggestions Russian assets in Canada could be confiscated and liquidated to help pay for the refugee and humanitarian crisis in Ukraine.

Buhler Industries, meanwhile, issued a company statement on Thursday morning distancing itself from Russia’s actions, saying it is “strongly opposed” to the Russian government’s operation in Ukraine and that it “does not condone this attack.”

“The executive team of Buhler Industries is united in the condemnation of the actions taken by the Russian Federation. We are deeply disappointed by the current events and are in support of a quick and peaceful resolution and offer our condolences to those affected and share in their grief,” said the company.

“Our values are rooted in North America where the company has been in operation since 1932. The company has manufacturing facilities in Manitoba and employees in Canada and the United States. Buhler Industries operates with autonomy; our staff is Canadian and American, the head office is in Winnipeg, Manitoba and company direction and decisions are made in Canada,” it continued.

Buhler said it intends to continue its North American operations — primarily in Winnipeg and Morden, Man. — as usual: “We appreciate the longstanding relationships we have with our dealer network, suppliers and partners, and look for grace during this disturbing time.”

“Russian-owned businesses need to, as we saw with Buhler Industries, denounce and call on Putin to quit acting like a barbarian. I think that’s the line that Canadian businesses that have Russian ownership should be taking, knowing full well that their shareholders and benefactors could end up on the sanction list,” he said.

As for balancing the impact on Canadians employed by companies with ties to Russia, Bezan said he believes there are ways to punish owners without disrupting business operations in Canada.

“All we need to do at this point in time is ensure these oligarchs who are responsible cannot benefit from those investments,” he said.