Now in its nineteenth year, the award honours individuals or groups who have made an extraordinary contribution to advancing agricultural business management practices in Canada.

Since 1972, Younie has served Prince Edward Island farm families as a district extension worker and has taken on leadership roles within the P.E.I. Department of Agriculture and Land Access. Younie has provided guidance to farm families, as she helped them with decisions involving expansion, the inclusion of a child as an owner, or other turning points in the business that required extensive analysis.

Younie retired in 2016 from the P.E.I. Department of Agriculture after 37 years of service.

Younie was also the leader of the Morell & Area 4-H Club for many years and implemented initiatives that created an interest and knowledge in agriculture. She sat on the P.E.I. Agriculture Sector Council Board as an ex officio for the P.E.I. Department of Agriculture. She also played an integral role in the development of the P.E.I. Farm Technician Apprenticeship Blue Seal Program, now in its 22nd year. 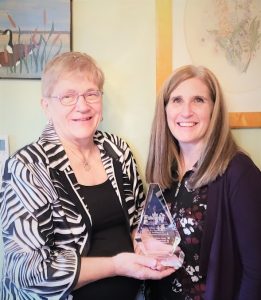 Younie was part of the creation of FMC, formerly the Canadian Farm Business Management Council, in 1992. Younie remained an active member of the FMC board of directors for a number of years and as the provincial/territorial representative to P.E.I.

Wilson Loree presented the award to Younie during the Agricultural Excellence Conference on November 24th saying “Colleen, your commitment and constant focus on farm families in P.E.I. and across Canada with practical strategies that address their issues and opportunities has gained membership for you in the group of award winners. Congratulations on behalf of Farm Management Canada and myself!”

“I feel deeply humbled, yet truly honoured, to have been selected for the 2021 Wilson Loree Award. It is an award to which I have aspired, never thinking that I could possibly be considered. This recognition holds great value for me. Thank you so much. Wilson has been a mentor to me throughout my career, so to have him present the award enhances its meaningfulness,” said Younie upon accepting the award.