Bags of spuds were handed out to Canadian politicians and passers-by on Parliament Hill today in Ottawa, in an effort to bring awareness to P.E.I.’s potato industry and a recent government order that has stopped sales and exports out of the red soil province.

On hand today was P.E.I. Premier Dennis King, potato industry representatives, and farmers, asking the federal government to lift the ban, put in place after two positive cases of potato wart were found.

It’s estimated about 6,000 bags of potatoes were handed out.

Social media was busy with senators and MPs, farm policy members, and Canadians sharing photos of the event.

The P.E.I. Potato Board estimates some 16 million pounds of potatoes worth more than $4.8 million have been lost to date due to the inaccessibility of U.S. fresh potato markets usually serviced by the province’s potato farmers.

“Losing a large part of your loyal and regular customer base, so suddenly and at this time of the year, is a huge defeat and, quite frankly, a catastrophe for our family farmers,” says Greg Donald, general manager of the P.E.I. Potato Board, in a press release. 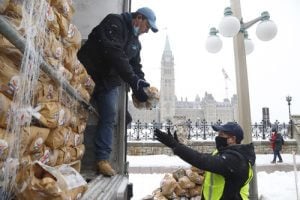 John Visser, a third-generation farmer from Victoria, P.E.I., travelled to Ottawa to join the demonstration. “We know there can be a great deal of complex topics when it comes to trade, but open markers for potatoes shouldn’t be one of them. We are here today to express to our federal officials how urgent it is to end this ban so we can deliver our potatoes to the plates and people that are expecting them this winter.”

The P.E.I. Potato Board says it has been working around the clock these last few weeks, speaking with farmers, P.E.I. government representatives, Minister of Agriculture and Agri-Food Marie-Claude Bibeau, and more, to resolve the issue.