Biology is a wonderful thing. Given enough time and the right ingredients, soil biological processes can do some pretty amazing things, including breakdown of herbicides, cycling and releasing nitrogen, and even disposing of pathogens.

The key is time: biology and biological processes can replace plenty of crop inputs given enough time. Especially for our northern climate, however, time usually takes the form of a gap year — a year with plant growth, but little harvest (read: cash flow).

Danny Ottenbreit farms near Grayson, Sask. He’s a few years in to adding a fifth crop to the grain farm rotation. The fifth crop is a green cover, designed to improve soil health, with a particular focus on the eroded hilltops and knolls. 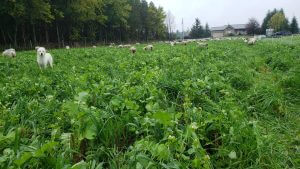 The design is simple: in year five, the field is sown to a cover crop mix and allowed to grow. One cut of hay is taken and sold, allowing for some cash flow, and then the re-growth is grazed later in the season by cattle, at no cost — but also no direct income — to Ottenbreit.

But, for farmers in their first 10 to 15 years of farming, who are more likely to be renting land or paying land mortgages, a year of non-income can make cash flow very tight.

Which begs the question: if governments, companies, and Canadians want farmers to adopt different practices, those that require more time for biology to do its thing, will lending follow suit?

So, will banks be a lending partner in this transition to greener tech and practices, with flexible lending products? Or is this push for lending incentives simply lip service, and a means for lenders to claim their own net-zero company structure through its borrowers’ accomplishments?

What’s clear is that the step-change at the production level will require similar disruptions along the entire value chain. If farmers and land owners are willing to make changes to land rent agreements, cooperate on livestock and grain production, and make significant investments in new technology at the farm level, what is the lending sector willing to do?