Updated to include comments from B.C.’s minister of agriculture.

The Fraser Valley of B.C. accounts for over 75 per cent of dairy production in the province, and the area has been hard hit by the “atmospheric river” earlier this week.

There are several hundred dairy farms in and around the flooded Sumas Prairie area outside of Abbotsford, east of Vancouver. 59 are under an evacuation order as of Wednesday, says Holger Schwichtenberg, chair of the B.C. Dairy board, in the interview below.

Everyone in the area was ordered to evacuate on Tuesday, however many farmers were in the midst of moving as many cattle as possible, by truck, boat and other means, to safety. Those that stayed behind to care for animals were urged to leave immediately on Tuesday evening due to the risk of a pump station failure leading to a dramatic increase in water levels.

Officials with the City of Abbotsford said 184 people were rescued by air and water from the area overnight Tuesday into Wednesday. 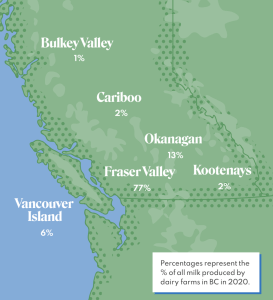 Schwichtenberg, who farms at Agassiz to the east of the hardest hit area, and other farmers have been taking in as many cattle as possible to ensure they are cared for, milked, and fed. However, he says that milk is not likely to get to market.

Milk trucks are incapable of accessing most of the farms for many parts of B.C., and he says producers are dumping milk.

B.C.’s Minister of Agriculture Lana Popham was part of a press conference Wednesday afternoon, where the premier announced the province has declared a state of emergency.

A visibly upset Popham shared that her ministry had been in contact with all commodity groups for the area, and directly with farmers. She said that she has personally been on video calls with farmers in the area with deceased cattle in the background.

The priority, Popham said, is to ensure that animals receive food in the coming days, whether they have been evacuated or not, and that there is a route to veterinary care for those who require it. “To be honest, some of these animals are in bad shape [after they’ve been evacuated],” she said.

Popham also noted that the agriculture testing lab in the region, which performs several tests include milk quality tests, is flooded and non-operational. Alberta and Saskatchewan have stepped in with offers of milk testing services in the immediate future.

Listen below to Kelvin Heppner’s interview Schwichtenberg, recorded on Wednesday.