Just a few weeks ago, Statistics Canada pegged the 2021 canola crop at over 14 million tonnes. The latest report out of the department has decreased that estimate further, to 12.8 million tonnes.

“Canola production is expected to fall 34.4 per cent to 12.8 million tonnes in 2021, as drought conditions on the Prairies drove yields to their lowest level in a decade (-39.5per cent to 25.3 bushels per acre), offsetting higher harvested area (+8.1 per cent to 22.2 million acres). If this were to happen, this would be the lowest canola production since 2010,” the StatsCan report published September 14th reads.

This latest report is based on StatsCan’s Crop Condition Assessment Program (CCAP) which indicates that overall plant health in Western Canada was lower to much lower than normal, having decreased considerably throughout August. This indicates the likelihood of lower than normal yields, StatsCan says. 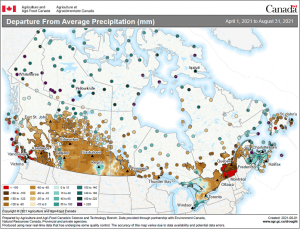 Departure from average precipitation (in millimetres) from April 1 to August 31, 2021 by province. (StatsCan, supplied)