North America’s most notorious weed has been found in Manitoba.

DNA testing has confirmed the discovery of a pair of Palmer amaranth plants in the Rural Municipality of Dufferin, which surrounds Carman.

“We knew it was just a matter of time before we see something. These weeds are moving quite rapidly, and unfortunately, we did find some,” says Kim Brown-Livingston, provincial weed specialist with Manitoba Agriculture and Resource Development, speaking with RealAgriculture on Tuesday.

Palmer amaranth, which routinely tops lists of the most troublesome weeds, is an aggressive pigweed species that originated in the desert of northern Mexico. It has spread through corn, soybean and cotton country in the U.S., and was first discovered in neighbouring North Dakota in 2018.

The plants near Carman were found late in the season in a dry bean field and submitted for testing at the Pest Surveillance Initiative (PSI) lab in Winnipeg.

Palmer amaranth is known for developing resistance to multiple herbicides, including glyphosate, but it’s not yet confirmed whether the plants in Manitoba are resistant. Since the PSI lab does not currently perform this type of test, Brown-Livingston has sent samples to her colleagues with OMAFRA in Ontario, where they’ll be looking for resistance to the usual suspects — Group 9, Group 2, Group 14, and Group 5 chemistries. She expects to know the resistance-testing results before winter.

As for how the seed arrived in this specific field, “we really don’t know, and I’m not sure we’ll be able to know,” says Brown-Livingston, noting pigweed seeds are known to move in contaminated seed, the digestive tracts of migrating waterfowl, in soil on machinery, and in livestock feed. (Story continues below video) 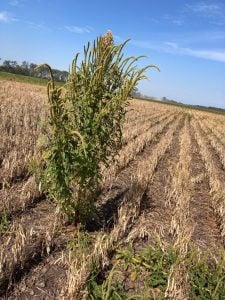 She urges producers to be diligent in scouting for not only Palmer amaranth, but two other concerning pigweed species that are becoming increasingly prevalent in southern Manitoba — waterhemp and smooth pigweed. All three are categorized by the provincial government as Tier 1 noxious weeds, meaning they must be destroyed so they don’t become established.

“We just really need to be watching because these are very prolific seed producers. We cannot let these things go through a combine, they will spread those hundreds of thousands of seeds through the field, and then you’re playing catch up. We want to stop them before they drop their seed and before they spread,” says Brown-Livingston.

Ideally, they’d be found earlier in the growing season, but most of the cases involving the three concerning pigweed species have been found later in the season in soybean or dry bean fields, where they’re easier to spot. Row crops, in general, are less competitive, especially in drought conditions, she notes.

“We’re not really that concerned about finding it in a really competitive wheat crop or a competitive canola crop…, but in the less competitive crops where we either don’t have a lot of herbicide options or there might be some resistance already, those are the crops we need to be much more watchful of,” explains Brown-Livingston.

Manitoba farmers and agronomists who think they may have Palmer amaranth, waterhemp, or smooth pigweed can submit samples to the PSI lab in Winnipeg for DNA testing. All members of the Manitoba Canola Growers Association are eligible to submit samples for testing at no cost.