Some Ontario edible bean and soybean fields are being hard hit by root rots, causing large patches of dead, dying, or highly stressed plants. The recent hard rains in some areas of the province have favoured root rot infection.

Depressions or areas of high compaction or poor drainage tend to show the worst symptoms. Poor root growth — restricted by hard pan, for example — predisposes a crop to root rots because of limited oxygen in the root zone.

Ontario’s plant pathologist, Albert Tenuta, says that fusarium root rot/wilt and pythium are most likely to blame, but rhizoctonia and black root rot can be an issue as well.

RealAgriculture resident agronomist Peter Johnson has been scouting fields showing damage and says edible beans are hardest hit right now. Some crops also seem to show some signs of recovery, but with the wet weather, these fields then begin to go backwards again. 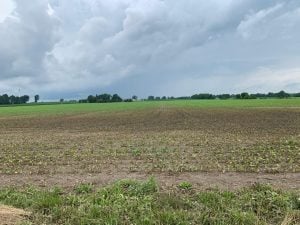 Unfortunately, there are no in-crop options for control of root rots; however, Johnson says that farmers are considering holding off on weed control passes on the stressed crop. The issue there is the weeds will continue to grow aggressively with recent moisture, say Johnson.

Tenuta adds that soybean growers should check soybean variety against phytophthora Rps genes and field tolerance ratings since these differences should be seen in the field. He adds that for some fields disease is an issue, but for soybeans wet feet (saturated soils, lack of oxygen, poor drainage, etc.) will also impact nodulation and N-fixation. This decrease in N availability is a widespread issue and a primary cause for yellowing, he says.

Root rot symptoms include dying plants in a patch, stunted plants, shedding of the lowest leaves, and if plants are dug up, browning of the tap root or missing roots might also be visible. 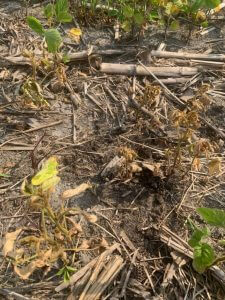 Because several crops act as hosts to edible bean and soybean root rot pathogens, rotation is key in decreasing the risk of infection in future years. Corn, wheat, other cereals, or alfalfa are good rotation options.