If a robot could perform any job on your farm, what would it be? We’ve asked this question before and picking rocks is a common answer — often said with more than hint of disdain for the task.

Now, a company founded by a farm kid-turned-tech executive is taking a shot at the concept.

TerraClear, led by CEO Brent Frei, raised US$25 million in Series A funding last week to develop an autonomous rock picking platform, which it describes as “a Roomba for rocks.”

“There are more than 400 million arable acres worldwide that have been waiting for a cost-effective and productive solution to this problem. Repetitive tasks like this are optimal targets for automation, and the technologies we are bringing to the field dramatically reduce the labour and time needed to prep fields for planting,” explains Frei, in a news release.

Prior to starting TerraClear, Frei founded Onyx Software and Smartsheet, which is now a publicly traded company with a market cap in the billions.

He started working on the robotic rock picking platform in 2016 after returning to the family farm in Idaho.

Earlier this year, TerraClear started selling its first rock picker attachment for skid steers and compact loaders. The rubber belt-driven design, which is still controlled by the driver, can collect up to 400 rocks per hour, picking rocks weighing up to 300 pounds without any manual labour, the company says.

TerraClear says its goal is to integrate artificial intelligence, imagery from drones to locate and map large rocks (see below), and computer vision with tractor guidance systems to fully automate the entire rock picking process. 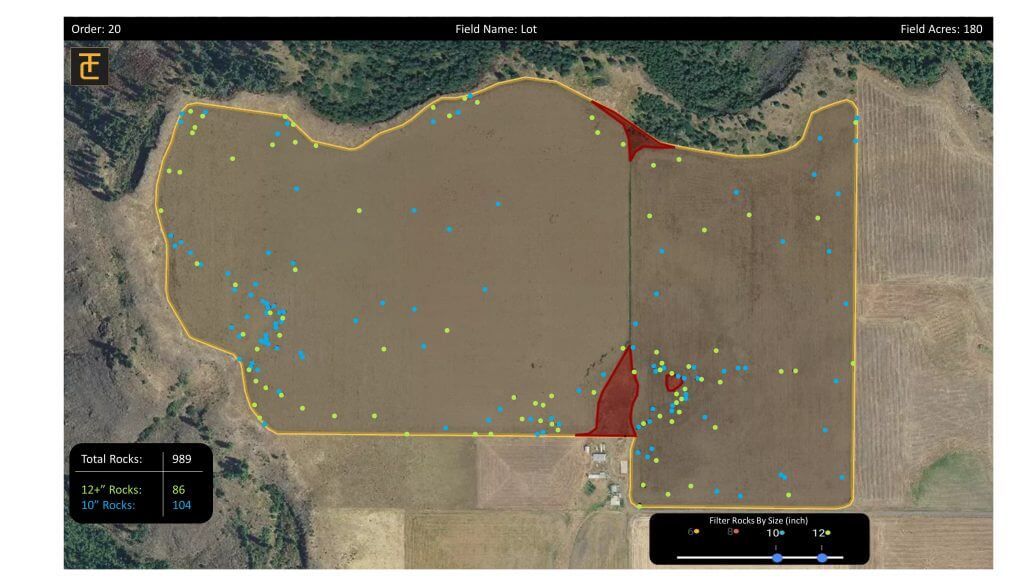 “We’re working every day towards a fully autonomous solution for rock picking — and that is a multi-year project. Along the way, we’re building solutions that solve this problem better than anything out there,” says president Trevor Thompson.

The $25 million funding round was led by Madrona Venture Group, and brings TerraClear’s total funding to $38 million.

There are good reasons why the task of rock picking frequently comes up when farmers talk about their farm robot wishes, as Matt McIlwain, Madrona’s managing director, notes: “Rock picking fits into the category of dull, dangerous, and dirty. It’s a perfect application of robotics and AI…”