Canadian Pacific Railway (CP) is set to become the first rail freight network to link Canada, the U.S., and Mexico after announcing a US$25 billion stock and cash agreement to acquire Kansas City Southern (KCS) railway on Sunday.

The enterprise value of the proposed deal, which has been approved unanimously by both railways’ boards of directors, is approximately $29 billion which includes $3.8 billion of outstanding KCS debt.

The combined entity, pending approval from the U.S. Surface Transportation Board and other regulatory authorities, would be called “Canadian Pacific Kansas City” or CPKC. Its global  headquarters would be in Calgary, Alberta, with U.S. headquarters in Kansas City, Missouri, and Mexico headquarters in Mexico City and Monterrey.

“This transaction will be transformative for North America, providing significant positive impacts for our respective employees, customers, communities, and shareholders,” says Keith Creel, CP’s president and CEO. “This will create the first U.S.-Mexico-Canada railroad, bringing together two railroads that have been keenly focused on providing quality service to their customers to unlock the full potential of their networks.” 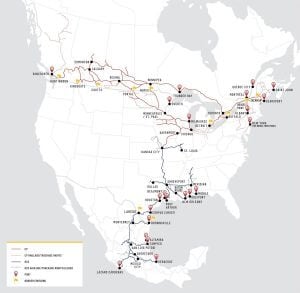 CP and KCS say grain, automotive, auto-parts, energy, intermodal, and other shippers would benefit from increased efficiency and simplicity from a combined network spanning across Canada down through the central U.S. to the Gulf, and across Mexico (see map above).

CP and KCS currently interchange at a shared facility in Kansas City — it’s the only point where the two railways connect. In other words, no customer will experience a reduction in railroad choice as a result of the deal, they say.

In addition to eliminating the Kansas City interchange, the combination will allow for single-line routes connecting KCS-served points in the south and CP-served regions of Western Canada and the Upper Midwest while bypassing Chicago’s complex rail hub on CP’s route through Iowa, note CP and KCS. They also see new single-line routes competing against trucks, especially in the Dallas to Chicago corridor, resulting in lower highway traffic and lower emissions.

In acquiring direct access to the U.S. Gulf, CP will be able to “seamlessly” transport oil to Gulf Coast refineries, “improving the economics of crude by rail,” noted Alberta Premier Jason Kenney in a tweet.

As for leadership, Creel has been tapped to serve as the CEO of the combined company. CP’s board also announced on Sunday that his contract has been amended to have him lead the company until at least early 2026.

CP has attempted several other mergers to expand its rail business in the U.S., including a failed $28 billion takeover bid for Norfolk Southern Corp in 2016 and unsuccessful merger discussions with CSX Corp. in the eastern U.S. in 2014.