What do hot air balloons, rodeos, and role models have in common? The answer is agricultural communications specialist Karen Lewis.

As part of our series featuring women in agriculture in honour of International Women’s Day, we spoke with Lewis about how strong women in her life have helped shape her career in agriculture.

Lewis makes her contribution to agriculture behind the scenes in her role at Synthesis, an agri-food communications and consulting firm in Guelph, Ont. Whether she’s developing a podcast, producing videos, consulting to industry, managing issues or writing a coffee table book, the days are always interesting, says Lewis. She’s been at it for more than twenty years and she can’t imagine being anywhere else.

Lewis’ path has been paved by fearless female mentors. “I come from a long line of strong, entrepreneurial women with amazing work ethic,” she says. With her agricultural roots running deep in Peel County, Ont., she was inspired at a young age by her great-grandmother and two grandmothers who didn’t let anything get in the way of them becoming businesswomen. 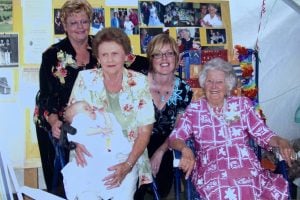 But perhaps no one blazed the trail more than her mother, Sheila Lewis, “who isn’t afraid to try anything – including piloting hot air balloons, hosting rodeos in the back 40, or establishing a candy business for her pre-teen kids to pay their own way through university,” says Lewis. “Mom has a work ethic like no other. Weekends weren’t for rest, but for work!”

Armed with a journalism degree and a college certificate in public relations, Lewis launched her career as an intern at an agricultural advertising and PR agency. From day one she was surrounded by more examples of women in leadership roles who showed her that anything is possible.

Listen to Bernard Tobin and Karen Lewis discuss the importance of strong role models. (Story continues after the interview)

One of her mentors was her first client ­– Kristine Savage of Syngenta Canada – who tragically passed late last year. “I’m indebted to Kris for inspiring me and showing me what’s possible for women in the sector.”

Lewis is also quick to advise young women to pursue a career in agriculture. “It’s such a fulfilling industry to be part of.”

She also shared a famous quote of empowerment – she believed she could, so she did.