Weed scientists in the southern U.S. say they have confirmed the first known case of broadleaf resistance to glufosinate — the active ingredient in Liberty herbicide.

The resistance to the widely-used herbicide was found in Palmer amaranth plants from two fields in Mississippi County, Arkansas.

The pigweed plants caught the attention of University of Arkansas extension staff last summer after three applications of glufosinate failed to control the weeds, according to a post on the university’s website written by weed scientists Tom Barber, Jason Norsworthy and Tommy Butts.

“Usually, if resistance is occurring it will be in small spots across the field or in a combined pattern from harvest the year before. These two fields had that ‘look’ and were very suspicious, to say the least,” they say. 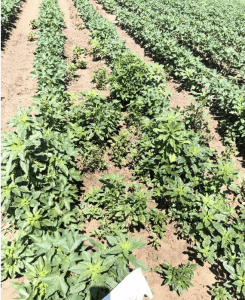 (Photo courtesy of University of Arkansas)

The plants were then soaked with a 2 per cent solution of Liberty, but the application was largely ineffective when evaluated 10 days later, so Barber and his colleagues collected seed for greenhouse screening over the winter.

Testing done through Norsworthy’s weed science program this winter showed the plants from those seeds did not die from rates of 32 fl oz/A (2.3 L/ha) of Liberty, and there were survivors at rates up to 256 oz/A (18.7 L/ha). (See photo above)

They note cotton producers in the region have relied heavily on glufosinate since the 2000s, when glyphosate resistance became widespread.

They say they’re also screening the plants for resistance to dicamba, as dicamba-resistant Palmer amaranth was identified in neighbouring Tennessee last year.

Barber and his colleagues are encouraging cotton producers in the area to add corn to their cotton-soybean rotations, as it would allow for different herbicides. Those who stick with the cotton-soybean rotation are being told to strongly consider using the Enlist (2,4-D) system, as well as multiple residual products at planting.

Only four other weeds in the world — all grasses — have been documented as developing resistance to glufosinate, including perennial ryegrass (New Zealand), rigid ryegrass (Greece), Italian ryegrass (New Zealand, Oregon and California) and goosegrass (Malaysia), according to the International Herbicide-Resistant Weed Database maintained by Ian Heap.