Ontario Premier Doug Food offered a sincere thank you to the province’s farmers for helping maintain Ontarians’ confidence in their food supply during COVID-19.

“You’ve all pulled your weight and then some during this crisis and I appreciate that,” said Ford during his opening remarks as he helped kick off the virtual 2020 Ontario Federation of Agriculture annual convention.

“When people were worried about food and supply shortages, [farmers] were there to reassure everyone,” said Ford. “You ensured food continued to flow from farm to the table; you ensured grocery store shelves were kept stocked; and you ensured that supply chains remained strong — that was so critical.”

“That certainly, during a time of uncertainty, meant the world to Ontario families,” said Ford who noted that the province’s farmers are again stepping up during the second wave of COVID-19. 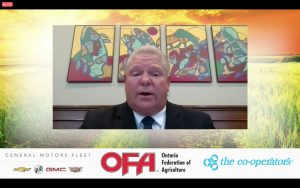 Ford offered examples of the great work farmers and their organizations are doing during the pandemic. He thanked Listowel, Ont. based Gray Ridge Egg Farms for donating 100,000 eggs to local food banks as well as Ontario dairy farmers for contributing an additional 200,000 litres of milk.

Ford said he will continue to support farmers during the crisis and noted that his government has provided an additional $50 million to support the business risk management (BRM) programs, pushing the commitment to $150 million annually.

Ford also noted his government’s financial support for the Enhanced Agri-food Workplace Protection Program to help keep agriculture and food workers safe during the pandemic, and the enhanced AgriInsurance coverage to help address labour shortages during the 2020 growing season.

Ford closed the address acknowledging the key role farmers and agri-food will play in the year ahead. “A strong farming sector will feed a strong recovery for everyone in our province,” he said.