Some of the earliest adopters in Western Canada have been growing cover crops for a long time, but interest has ramped up over the last few years, and so has the need for information and data to inform farmers, agronomists, and researchers in their decisions related to cover cropping.

Callum Morrison, a PhD student at the University of Manitoba, is working to address that — to create a clearer picture of cover cropping on the Prairies.

2020 marks the second year of the Prairie Cover Crop Survey project, which Morrison is administering together with Dr. Yvonne Lawley from the Department of Plant Science at the U of M.

In 2019, 211 producers accounting for just over 83,000 acres of cover crops — from the Peace River region down to the U.S. border — participated in the survey, sharing insight on their cover crop practices and experiences. 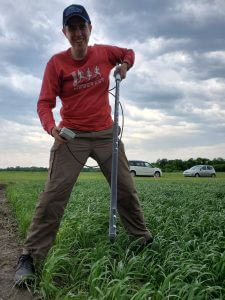 While the final report on the 2019 survey has not yet been published, Morrison says they found 16 per cent of respondents grew their first cover crop in 2019. The most common reasons for growing them included improving soil health, improving seed and soil biology, improving nitrogen availability, weed suppression, and erosion control.

There are dozens of different cover crops grown in Western Canada, but the most common? That would be oats — likely due to farmers being familiar with the plant and the convenience of having seed on hand, followed by clover, peas, radish, hairy vetch, and fall rye — although the species grown varied greatly depending on location.

Morrison says around 150 farms have already completed the 2020 survey, which launched October 1. Unlike last year, the 2020 survey is open to farmers who have never grown a cover crop, as he says they’re also looking to understand the reasons for not planting a cover crop.

In the end, the goal for the three-year project is to provide more context for cover cropping in Western Canada.

“Cover cropping is always a very personal decision, local to your farm and your rotation, but (the survey results) will allow farmers to look and see what other farmers are doing, how they’re doing it, and give them a few ideas, and hopefully provide real benefit to some farmers who are thinking about growing cover crops,” he says.

Morrison says it will also help direct research on the topic.

“Research goes where there is an appetite, and if we can show farmers are interested in cover crops and that they’re being used, it’s far more likely that there’s going to be future research,” he says.

There’s also a possibility government may use the findings in developing policy, if say, farmers were to be compensated for the carbon sequestered by cover crops. Morrison notes many jurisdictions in the U.S. already offer incentives for growing cover crops.

Morrison notes COVID-19 has caused a few setbacks, but the full results from the 2019 Prairie Cover Crop survey are still slated to be released before the end of November.

Listen to Callum Morrison discuss the Prairie Cover Crop Survey, the findings so far, and how the information might be used: