Finishing up at 258.8 bushels per acre, the feed wheat paddock produced 17.398 tonnes per hectare in a region that averages about 12 tonnes/hectare.

“We are very proud to have achieved such a result. The Guinness World Record is a nice recognition of our hard work and new innovations we‘ve put in place. While we were thrilled with the record result in 2017, we saw ways in which we could make improvements and achieve an even higher yield,“ says Watson, in a press release. 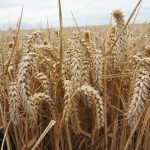 Planted in April 2019 and harvested on February 2020, the wheat variety was Kerrin, bred by KWS, a feed wheat.

“We are delighted to see another Guinness World Record come out of New Zealand and to have contributed to this incredible result,” says Bayer Regional Business Manager for Mid & South Canterbury, David Weith.

So what does a 17.398t /ha wheat crop look like? pic.twitter.com/fNPlXsGaLM