Last week, a U.S. court decision to cancel the registration of in-crop use of dicamba herbicides left regulators, product manufacturers, herbicide applicators and farmers scrambling to understand the ramifications of the ruling and the implications for millions of acres of 2020 U.S. crops.

Sources indicate that the ruling will not impact use of the herbicide in Canada during the 2020 growing season. Overall, reports of dicamba damage to non-target crops in Ontario has been minimal. Mike Cowbrough, Ontario Ministry of Agriculture, Food and Rural Affairs weed management specialist,  believes sharp focus on dicamba stewardship has helped keep the herbicide on target.

“I think we’ve done a pretty good job in eastern Canada of keeping it as a pre-plant, pre-emerge application,” Cowbrough told those participating in the Exeter-Mount Forest agribusiness conference call Tuesday morning. He did note, however, that hot weather does increase the risk of crop damage from post-emergent dicamba applications. He’s reminding growers and applicators to be very cautious in their approach “or we could expect restrictions on when (dicamba) can be applied.” 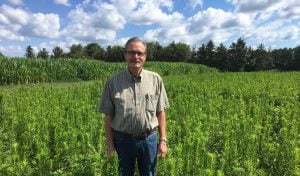 University of Guelph, Ridgetown College weed scientist Dr. Peter Sikkema feels the use of “dicamba in Xtend soybeans is a real benefit to Ontario farmers.” When it comes to controlling glyphosate-tolerant giant ragweed and Canada fleabane it’s an extremely useful tool, he added, noting that “application made pre-plant or pre-emergence, within reason, is relatively safe… I think the number of incidents has been really low in Canada. I would hope that that continues.”

With warm weather rolling through Ontario this week, BASF technical development manager Rob Miller told the call that dicamba stewardship will be top priority for his organization. “With hot weather coming our way, we definitely don’t want to be going post-emergent,” Miller said. He noted that most dicamba in the province was applied pre-plant and early post-emerge. If growers still require a dicamba application he recommended they be timed for later in the week when cooler temperatures are forecast.

Miller also suggested growers take a hard look at their weed spectrum and only consider dicamba if there are troublesome glyphosate-resistant weeds in the field.