After wreaking havoc in the U.S. and parts of Ontario, herbicide-resistant waterhemp has arrived on the scene on the eastern side of the Canadian Prairies.

Patches of the prolific weed — a cousin to Palmer amaranth — were found in multiple fields in five municipalities in Manitoba last year. In one case, over 30 acres were destroyed to try to get a handle on the nasty weed.

While it looks similar to redroot pigweed at an early stage, waterhemp grows much faster and has a longer germination window, setting seed into August, says Tammy Jones, weed specialist with Manitoba Agriculture and Resource Development, in this Soybean School episode.

At this point, surveillance is critical, she says, stressing that growers in Manitoba need to keep an eye out for it. One of the most distinct differences is waterhemp has a smooth stem, while redroot pigweed has a fuzzy stem. Waterhemp also has oval or spearhead shaped waxy-looking leaves.

As Jones notes, a single waterhemp plant can produce between 250 thousand and a million seeds.

“If you do a mental math calculation on 35 acres of really dense waterhemp, it’s expensive in the short term, but if you think about how much seed could be produced, it’s over 305 billion seeds. Think about how much more it could cost over however long it would take to kill all those weeds,” she says. 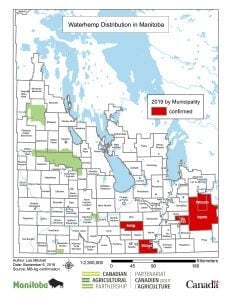 There’s also the cost of lost yield. Research in the U.S. has shown season-long competition by waterhemp can slash soybean yields by over 40 per cent, while waterhemp that emerged as late as the V5 stage in soybeans still reduced soybean yields by up to 10 percent.

Since it can germinate throughout the summer, one herbicide application often isn’t enough to control the weed in row crops, but it has also shown it can quickly develop resistance to post-emergent herbicides. In the U.S., waterhemp has developed resistance to at least seven herbicide groups, including Group 2, 4, 5, 9, 14, 15  and 27.

“It’s like a stacked trait in a weed that’s already hard to kill,” she says.

Jones also explains she’s finding a spectrum of waterhemp biotypes, so she’s not distinguishing between “common” and “tall” waterhemp species. 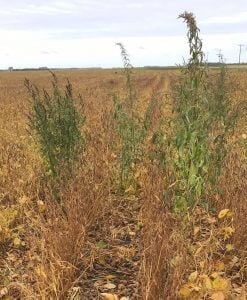 A small patch of waterhemp — ideal for hand-picking and destroying. (courtesy Tammy Jones)

That being said, tall waterhemp is listed in Manitoba as a Tier 1 noxious weed, so there’s a legal requirement in the province to destroy it.

“You must do everything possible to eradicate that weed,” she says, whether that’s pulling it by hand or spraying.

Waterhemp has likely moved north in water, although it can also be spread by equipment and waterfowl. In 2019, it was found in more than one field in the municipalities of Rhineland, Dufferin, Ste. Anne, Reynolds, and Whitemouth.

Since waterhemp germinates with sunlight, cover crops can play a role in managing against the weed, says Jones. Narrow row spacing, increased seeding rates, soil residual herbicides and inter-row cultivation are other agronomic practices that can help slow its spread.

Check out the Soybean School episode below for more on waterhemp’s arrival in Western Canada, and what to do about it: