It’s not often farms get a chance to host top executives from a huge company; so when the opportunity knocks, you open the door — or in this case, the barn door.

For Creekside Dairy’s Julaine Treur and her husband Johannes, a sixth generation dairy farmer, their moment came when they got the chance to host executives from Starbucks, thanks to a friend recommending their organic dairy farm.

“[Our friend] had been in contact with some people from the Sustainable Food Lab in Vermont and they do this sort of thing where they take out different companies or groups of companies to farms to kind of show them where the products that they’re using in their stores or companies come from,” she explains. “So, Sustainable Food Lab was going to be doing this with Starbucks, [to] focus on sustainability in the dairy industry.”

Treur, along with three other farms in the Fraser Valley of British Columbia, hosted the executives, including the coffee company’s first chief sustainability officer, Michael Kobori. This is the same company that announced earlier this year it would be slashing the amount of dairy products used at its stores by 2030 in an effort to reduce its carbon footprint. 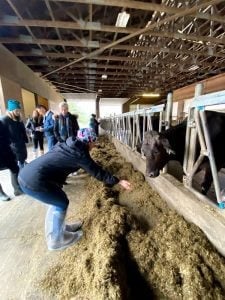 Though it wasn’t her first farm tour, she says it was a little intimidating at the beginning. As they walked through the barn and milk parlour, questions about why they chose to have a dairy farm were asked, along with if Treur thought her kids would carry on the legacy.

She says some of the people had actually never been to a farm until that day, while others were familiar with the day-to-day operations. One thing she shared with the group was the amount of time it takes to milk a cow, as there’s a misconception to some that the cows get milked all day.

“[We explained], no, we’re not milking all day, every day. It only takes two hours at a time, five minutes per cow — they thought that was kind of neat,” she says.

When it came to their turn to ask the employees questions, she says they didn’t hold back in addressing the news about a reduction in milk products.

“Once they asked us if we had any questions, it wasn’t a big step to say, look like we really, really appreciate you guys coming out, we really hope you’ve learned a lot. But what’s going on? Why are we hearing that Starbucks is moving away from dairy?”

From there she says due to Kobori still being fairly new to the company, he handed the question off to Hans Melotte, executive vice president of the global supply chain, who reiterated several times that dairy isn’t being taken off their menu.

“He said that Starbucks is definitely not moving away from dairy. Dairy is and will continue to be a huge part of the menu, both in drinks, but also like in things like cheese and their sandwiches and, things like that. But they’ve had, of course, more demand for plant-based milk from people that are lactose intolerant [and] people that choose for other reasons to not include dairy in their diet,” she explained. “And they want to be able to provide for all of their customers and at the same time, they are looking at the sustainability and environmental footprint of all of the products they use in their restaurants.”

For Treur, she says having these “higher ups” and decision makers on the tour was incredible and that she hopes more companies will take the chance when they have the opportunity to do so.

Listen below to Creekside Dairy’s Julaine Treur share her story about having Starbucks executives visit her farm: