Starting this month, the Farm Freedom and Safety Act (FFSA) has come into effect. Put in place by the Alberta Government, the Act — known as Bill 26 — is a replacement of Bill 6, introduced by the previous NDP government.

In it, there’s changes to current employment, workers compensation coverage (WCB), and occupational health and safety requirements for producers. At this year’s FarmTech show held at Edmonton, Alta., AgSafe Alberta’s booth was a busy one as some farmers still don’t fully understand what the new act means for their farms.

Executive director for the organization, Jody Wacowich explains that the first thing a producer needs to know is Alberta’s definition of what a farm is for the purpose of occupational health and safety (OHS) under the FFSA.

“It’s the cultivation of crops, or raising of animals, so it encompasses all our standard things that we think about for farming, but it would also include some of the fish farms, and horse stables,” she says. “(Horse stables) often think they’re not included, but they do fall under (the new Act).”

Wacowich says then the farm owner needs to decipher who’s considered a worker. The table below created from AgSafe Alberta explains who would fall under the FFSA as a worker. 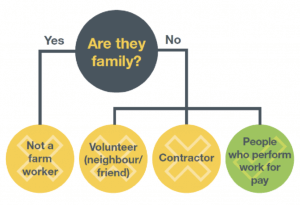 Under FFSA, she says the Alberta Government has made WCB optional for those with five or fewer employees.

“They have a choice to not have any insurance at all, I certainly don’t recommend that, I think there’s huge risk not insuring those employees,” she says adding that if y0u choose to have WCB and one of your employees get hurt, the employee can’t sue you. Conversely, if you choose not to have the coverage, you could be in for an expensive lawsuit.

For independent insurance, so far Wacowich says she knows of only one provider that has the agriculture specific coverage ready now. As far as the cost difference between the two, she says there’a a good chance WCB would be the cheapest option.

When it comes to occupational health and safety (OH&S), she explains those standards now blanket any farm with a paid workers, regardless of work hours and number of employees. However, when it comes to family members and OH&S, Wacowich says it’s a tricky area due to specifics and it’s best to contact the AgSafe office to get the correct answer for your farm.

Listen to the discussion between Jody Wacowich of AgSafe Alberta and RealAgriculture’s Jessika Guse below: