Ever since drones starting gaining more traction on farms, there have been farmers talking about whether one day drones would fill the sky, spraying crops. Think about it: no soil compaction or mechanical crop damage during application! Of course, the idea of spraying by unmanned aerial vehicle (UAV) brings up the possible hold backs, such as load capacity, battery life, and the regulatory environment.

Volocopter is trying to bust through those challenges.

In the John Deere future farming zone at Agritechnica, Volocopter showed off the possibilities of drone spraying.  The company known for its drone taxis has a partnership with John Deere to develop UAV technology for the agricultural industry. 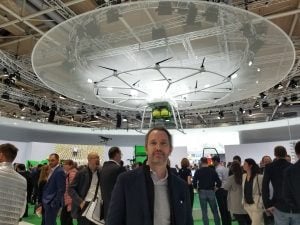 Even though the Volodrone was in the future farming area, Volocopter CEO Florian Reuter says, “I would say the Volodrone is very close to reality.”

In the video below, Shaun Haney talked to Florian Reuter, chief executive officer, Volocopter about the partnership and the engineering behind this very large spraying drone.