You know you’ve got a hot ticket item at a farm show when you need crowd control while doing an interview. 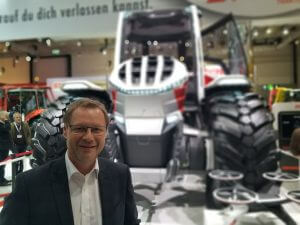 Christian Huber in front of the Steyr concept tractor (RealAgriculture, 2019)

Christian Huber, with Case IH/Steyr, says that there’s been much interest in electronic models. “This baby here offers a hybrid system,” he explains, with an electric generator that powers four independent wheel motors and features a battery system.

The model on display (the Konzept) included a 4.5 L diesel engine, but Huber says that could potentially be swapped out for a gas or alternative-fuel engine. Nothing is set in stone yet, as this is a concept unit — the sky is the limit, he says.

There is plenty of interest in electric drive, Huber says, as farmers like that instant take-off and having immediate power available. With projected road speeds of 60 kmh, he says this unit will also pull huge loads with an electric engine boost to keep you moving even on steep climbs.

The battery set-up means you can switch to zero-emission mode to decrease exhaust in the barn and also decrease noise, in the barn or through town.

Moving from concept to reality is pretty likely, Huber says. The company is collecting information and feedback from customers, and will then move to a prototype in 2020. “Next year, we’ll put it in iron,” he says.