Manitoba Agriculture reports a new strain of clubroot has been identified in the Rural Municipality of Pembina.

The soil-borne pathogen of canola and other brassica species have several pathotypes. The new strain of clubroot is identified as pathotype 3A, and is able to overcome some first-generation sources of genetic resistance in commercial canola varieties, says Manitoba Agriculture. This means that traditionally rated “resistant” or “R” canola varieties will not be effective in preventing clubroot infection against this strain of the disease unless specifically labelled for resistance to 3A. 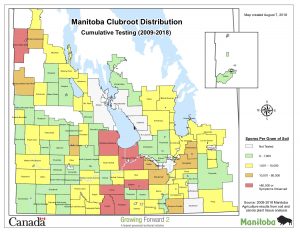 Clubroot is a soil-borne disease, and can be transferred from field to field on soil particles. Soil movement can be on footwear, vehicle tires, farm machinery, custom equipment, or via wind or water movement.

The discovery of pathotype 3A in the Rural Municipality of Pembina comes after multiple cases of clubroot DNA and plant symptoms having been found throughout the province of Manitoba since 2013.

“This is yet another cue for the industry to continue to take this disease seriously and implement clubroot management plans,” says Dan Orchard, agronomy specialist with the Canola Council of Canada. “We still have an opportunity to get ahead of this disease and limit the impact it has on canola producers and the industry.”

All canola producers are encouraged to grow clubroot resistant varieties, limit the movement of soil, extend rotations to at least a two-year break between canola crops, control canola volunteers and other brassica hosts, and diligently scout, says the Canola Council of Canada.

“It is critically important to limit the pressure we put on resistance by using resistant varieties before spore concentrations are high, extending the break between canola crops and changing up resistance sources if necessary,” says Orchard.

If you are concerned about clubroot on your farm, the Plant Surveillance Initiative Lab (PSI Lab) in Winnipeg can test soil samples and provide information on if clubroot present, see www.mbpestlab.ca for more details.