Manitoba Agriculture and Manitoba Pulse and Soybean Growers have confirmed soybean cyst nematode (SCN) is present in the province. Research conducted by Dr. Mario Tenuta and his team at the University of Manitoba found four positive findings out of 106 fields surveyed. The fields were in four out of 18 municipalities.

Rural municipalities where SCN has been detected are: Norfolk-Treherne, Rhineland, Emerson-Franklin, and Montcalm. 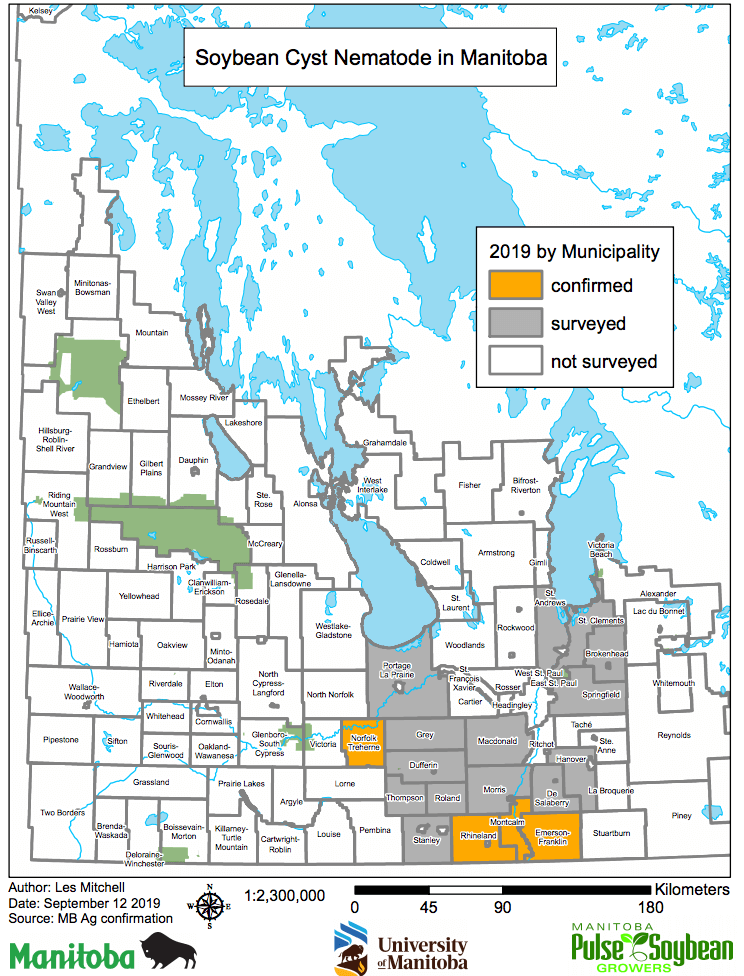 As the pest feeds on soybean roots, causing yellowed leaves, stunted plants and yield loss, early detection can be quite labour intensive as one would have to dig up the plants with roots attached, soak the roots to wash off all soil and then examine roots for lemon-shaped cysts. Those cysts are very tiny, less than 1 millimeter in diameter and are just barely visible to the naked eye.

The levels of cyst populations found are extremely low, according to a news release. Manitoba Pulse and Soybean Growers says, “the arrival of SCN in Manitoba is not surprising, given the northward spread and distribution across North America. Once established, SCN can remain in the soil for many years.”

SCN can still be be avoided by having good biosecurity protocols when it comes the transfer of soil.  Populations of SCN can be minimized by rotating to non-host crops, growing SCN-resistant soybean varieties, growing cover crops, reducing tillage and controlling host weed species, the province says.

Soybean producers are encouraged to use SCN-resistant varieties if they farm in any of the four Rural Municipalities with positive cases.