It’s a running joke among sheep farmers that 99% of a sheep farmer’s job is saving these wooly beasts from the 1,001 ways they try to die. After a few years owning sheep, I am still surprised by the silly ways they get into a pickle, but there’s likely nothing more frustrating than losing a sheep to a mysterious cases of SBI, “something bad inside.”

The truth is, sheep don’t really deserve the trying-to-die reputation — most cases of SBI are often nutrition or parasite-related – but due in part to a lack of training and knowledge transfer, sheep farmers often scramble to treat sheep with online advice and the few tools at their disposal.

Laurie Maus, a farmer and soon-to-be-retired purebred sheep breeder in eastern Ontario, doesn’t think it has to be this way, and she’s launched a new company to work with sheep farmers to put some power back in their hands. So often, internal parasite loads in sheep drag down production and lead to suddenly dead sheep, leaving the farmer confused and feeling defeated, she says. It’s also common that when sheep are looking poorly out on grass, the first thing a farmer asks is which dewormer to use, but that’s actually backwards. Dewormers are a valuable tool in parasite management, but should be one of the last points in a parasite management plan. Instead, decreasing total parasite loads and culling those animals highly susceptible to parasites will get a farmer further ahead, says Maus. 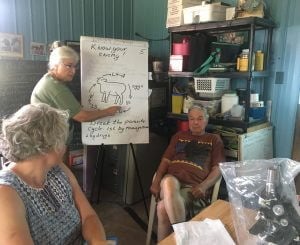 Maus has been hosting fecal egg counting workshops at her Hawk Hill Farm at Dunvegan for several years, taking the opportunity to show farmers how to monitor parasite loads in their flock and evaluate dewormer effectiveness. During the workshop, farmers learn about parasite life cycles, how parasite resistance to dewormers happens, and how to select for parasite tolerance in their ewe flock. It’s typically an eye-opening day for many, especially when they learn that pasture needs close to 60 days without sheep in order to effectively decrease parasite re-infection risk.

A new venture, No-Sheep Sherlock, builds on the fecal sampling workshop and takes parasite management one step further, Maus says. The expanded service includes an on-farm tour and advising to develop a whole-farm parasite prevention plan. Too often, Maus says, farms may have set up rotational grazing but use common areas every day, or are under-dosing sheep  when they do use a dewormer. The one-on-one training means farmers can ask all the questions they have, and perhaps save those sheep from “something bad inside.”

Listen below to Laurie Maus explain how No Sheep Sherlock came to be, and how sheep farmers can take parasite management to the next level on their farms.