Although Agribition has come and gone, there’s still much talk around town about Jim Reeves, the the Texas longhorn steer that graced the show for the first time in 2018.

Owner Kris Johnson says about the longhorns: “They’re a very very docile breed, which is what’s so special about Jim Reeves, he’s a big massive steer, but he’s just so (calm) and easy going, easy to work with,” Johnson says. 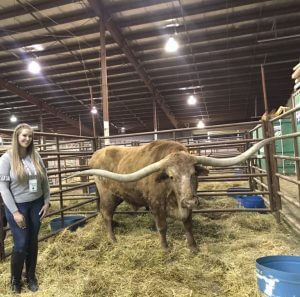 Speaking more in-depth about the breed, Johnson says they have a very low birth weight and the meat quality is quite lean “almost like buffalo meat.” In regards to the horns, Jim Reeves’ are 110 5 inches from tip to tip according to Johnson who adds the steer has the 10th longest set of horns in the world. The Guinness World Record for a longhorn is 126.375 inches.

Have horns, will travel

Johnson says during the course of the show, the number one question asked was how on earth do you transport such a large animal? His response, “We just use a regular 24-foot stock travel that’s eight feet wide.”

Listen below to RealAgriculture’s Jessika Guse speak with Kris Johnson of I M Bar Longhorn Ranch all about the Texas longhorn breed.