When Lawrence MacAulay was first elected to Canada’s House of Commons, Brian Mulroney was Prime Minister. Twenty seven years later in 2015, he was named to Justin Trudeau’s cabinet as Minister of Agriculture and Agri-Food.

After 30 years in parliament, the 72-year-old former dairy and potato farmer from Prince Edward Island says there’s still more to do and he’ll be ready for another election in 2019. But until the writ is dropped in the new year, he’ll be kept busy with a host of foreign and domestic farm issues.

Earlier this week at the GrowCanada conference at Ottawa, RealAgriculture’s Shaun Haney asked MacAulay about his top priorities heading into the new year. Trade heads the list. The minister is fresh off a trip to China where newly signed agreements will help double Canadian trade with that nation by 2025. 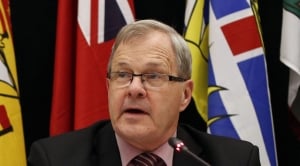 Agriculture Minister Lawrence MacAulay continues to lobby for canola trait approval in China but growers and the industry must be patient.

MacAulay notes that Canada’s canola business with China is now closing in on $4 billion annually, almost doubling since he took over the agriculture portfolio. There’s much work still to be done, however, especially on the canola trait file where three new genetically modified canola traits are awaiting approval. MacAulay says the topic came up in China “but it didn’t happen… All governments are slow, but in China, you have to be patient.

“It would be great to have them for the 2019 season, but they have to approve them and they haven’t done that as of yet,” added MacAulay. (Story continues after the interview.)

There’s also been speculation that Canada signing trade deals with China could impact the soon-to-be-signed United States-Mexico-Canada Agreement (USMCA). MacAulay says signing deals with China will not hinder Canada’s ability to close the USMCA deal. Canada is an exporting nation and it will continue to expand and accelerate trade, he says, “but we also understand very well that our most important trading partner, and best friend, is the United States.

“We want to make sure we trade with nations and diversify our trade,” notes MacAulay. “China is our second-largest trading partner and we will expand that trade.”

In the interview, MacAulay also discusses Prairie grain movement, and developments since the passage of Bill C49 in June. He’s pleased with the investment in rail cars he’s seeing from the railways, but it will take time to tackle all the challenges facing grain transportation.

MacAulay also discussed the challenges facing Ontario farmers as they struggle with revenue losses caused by high levels of deoxynivalenol (DON) in their corn crops. He’s working with his provincial counterpart, Ernie Hardeman, Ontario’s Minister of Agriculture, Food and Rural Affairs, to assist these farmers.