Entering its 48th year, Agribition has officially kicked off in Regina, Saskatchewan. During the opening remarks it was announced that the federal and provincial governments will invest up to $500,000 to support the Canadian Western Agribition (CWA). The funding will be in increments of $100,000 per year and run until 2023. The costs will be shared 60/40 between the two levels of government with the feds having the lager share.

The money will be invested in the CWA’s market development program. The goal is to increase registered international buyers at the show and to conduct outgoing missions to high-value markets.

Although not at the burning of the brand ceremony, Agriculture and Agri-Food Minister, Lawrence MacAulay said in a news release, “Our government is committed to investing in essential market growth programs, like the Canadian Western Agribition’s Market Development Program, that help farmers promote Canadian beef around the world.”

In the release MacAulay went on to say the program will help with beef and livestock market expansion and attract international business — which are both vitally important to the continued growth and prosperity of the Canadian agricultural sector.

Saskatchewan’s Agriculture Minister, David Marit, added “Canadian Western Agribition’s plan for growth aligns with the government’s own goals. As an export-based province, this is an excellent investment for the future of agriculture in our province.”

“It gets bigger and better every year,” according to the Honourable Gerry Ritz, who was honoured to be one to burn the brand and to officially open this years event.

As international trade is always top of mind, this year’s event showcases 12 purebred cattle breeds. It’s the first time in 24 years the Texas Longhorns will be at the show. Also new, alpaca producers will be on hand at this year’s show to showcase the animal, typically raised for its fibre. 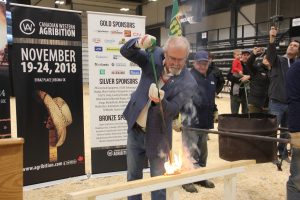 The Honourable Gerry Ritz officially opens Agribition by burning in the brand!

Therapy livestock animals, including cows, donkeys, chickens and rabbits, along with their handlers will be at the Wild Blue Psychology display, located in the Ag-Ex pavilion. Research from the Wild Blue team says that its their animal programs to treat anxiety, depression and other mental health concerns.

There will also be a major announcement on Tuesday surrounding mental health within agriculture. Executives from Farm Credit Canada, 4-H Canada, CFA, Cargill, and the UFA will be making the announcement for an industry partnership to promote mental well-being.

The CWA’s annual trade show brought in 365 international buyers last year and attracted 1,250 international guests from 86 different countries. To find out more about what’s new at the show, click here.