Ontario Federation of Agriculture president Keith Currie is hoping 2019 will be a prosperous year for farmers in the province.

Earlier this week, the Colingwood, Ont., farmer was acclaimed to his third term as leader of the farm lobby organization. A big part of Currie’s success over past year has been his leadership in drafting the OFA’s 2018 Producing Prosperity provincial election campaign.

The campaign was a departure from traditional farm lobby election efforts that have typically presented a laundry list of items farmers require to do business. The Producing Prosperity campaign focused more on convincing urban MPPs and their city constituents that agriculture really matters, especially when it comes to economic growth, job creation, affordable housing, increased food security and environmental stewardship. 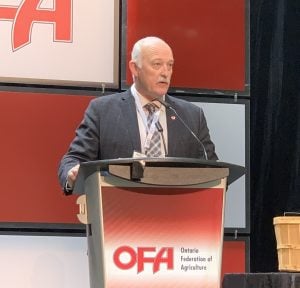 It has only been six months but OFA president Keith Currie is encouraged by what he has seen from the Doug Ford government.

“We’re really encouraged by what we’ve seen since the provincial election here in June. Of course, that was the crux of our campaign – the Producing Prosperity or economic development theme – and we had a lot of uptake from all different party candidates,” says Currie.

Throughout the campaign that brought Doug Ford and the Progressive Conservatives to power last summer, all three major political parties gravitated to the campaign themes and incorporated them into party messaging.

Further encouraging is the fact that echoes of the campaign continue to be heard almost six months after the votes were counted. In this interview, Currie offers an assessment of what it’s like to work with the new provincial Conservative government and OFA’s priorities over the next year.

“Any time you have a change in government you always worry about starting over from a relationship standpoint, and certainly there’s a lot of new faces on the staff side,” says Currie. “But with respect to the cabinet ministers, there’s a lot of folks who we have a long-standing relationship with. So, that’s made the conversations very easy to begin with.”

Story continues after the interview.

Currie acknowledges that in its early days, the Ford government is keenly focused on Ontario’s debt and program and service review. “On the flip side, they’re also looking to reduce the burden on businesses, especially around regulatory burdens. They’re saying that if we can make life easier for you to do business, you will be more successful and more profitable,” notes Currie. “That’s kind of what they’re doing, and they’re looking for more ways to do that.”

Currie says OFA will be focusing on a host of issues, including affordable energy for Ontario farmers and expansion of natural gas to rural Ontario. There’s also the need to invest in rural broadband to bring efficient internet service to farmers and rural communities as well as a host of regulatory issues.

“We are not holding back on asking for investment,” says Currie. “They recognize how big agriculture is in Ontario, so those conversations are going well at this point. Although it’s been six months, it’s really a short timeframe to get the ship turned around, but we’re encouraged by what we see so far.”

“The NDP agriculture critic John Vanthof, who is not only a former board member of OFA, but a longtime farmer and friend of OFA, introduced a bill last Thursday asking for a billion dollars over 10 years to be invested in rural broadband,” notes Currie. “It certainly is a key piece to our Producing Prosperity push… and there’s a recognition that rural broadband needs to be upgraded.”