Announced Wednesday, Tranberg will take over from Bryan Walton the current president and CEO of both organizations. Walton is set to retire in the early part of next year.

As Walton has been with ACFA and NCFA for more than 11 years, Tranberg says she has big shoes to fill, but is up to the challenge.

“I am very excited to join both the ACFA and NCFA teams,” says Tranberg in the news release. “These organizations are respected leaders in the Canadian cattle industry, and I am honoured to be chosen to work with the boards and staff in order to represent Alberta’s and Canada’s cattle feeding sectors.” 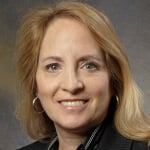 Holding both a BSA and MS in Molecular Biology and Plant Pathology from the University of Saskatchewan, as well as a Horticulture Diploma from Olds College, Tranberg is a familiar name in western Canadian agriculture. Tranberg most recently served as executive director for SaskCanola for more than three years. Prior to that, she was an assistant deputy minister for the Saskatchewan Ministry of Agriculture and as the vice president (Western Canada) for CropLife Canada.

“We’re delighted to welcome Janice who, like her predecessor, will serve in a dual role as president and CEO for both NCFA and ACFA,” Ryan Thompson, NCFA chair says.

Tranberg will take officially take over the position on November 1, 2018.

Shaun Haney caught up with Tranberg after the news became public to discuss her move to Alberta and the cattle industry.