Although the European Union is currently experiencing significant political shifts within its body of countries, it is still one of the world’s leading economic blocks and is very attractive to exporters from around the world. Its history of protectionism, with tariffs and import quotas on agricultural products, is well documented. This makes trade with the EU a very complex endeavour.

U.S. President Donald Trump and President of the European Commission Jean Claude Junker recently shook hands on what could be a new start to the Trans-Atlantic Trade and Investment Partnership (TTIP), which had previously been abandoned. This cozying up is occurring just when there has been a lot of focus on agricultural trade between the EU and the U.S.

I have been hearing from RealAgriculture readers that Canada is being left behind in Europe — that the U.S. farmer could, in fact, have the opportunity to increase soybean exports into the EU. Further, they worry that, in comparison to what President Trump is promising to accomplish, Canada is not doing enough.

So what of trade between Canada and the EU? (more below)

Hear Brian Innes of CAFTA discuss the power of CETA and the opportunity for Canadian agriculture.

Brian Innes, with the Canadian Agri-food Trade Alliance (CAFTA), has the lead with regards to European trade. He says, “I see this as the U.S. trying to catch up to Canada on trade into the EU.”

Canada has already signed a free trade agreement with the EU in the fall of 2016. It was not an easy deal to complete and it came with major obstacles and hurdles.

Some of you that have heard me speak before, know that the completion of the Comprehensive and Economic Trade Agreement (CETA), produced a very special, non-partisan moment between former Conservative International Trade Minister Ed Fast and the current Minister of Foreign Affairs, then Minister of International Trade, Chrystia Freeland, in the House of Commons. 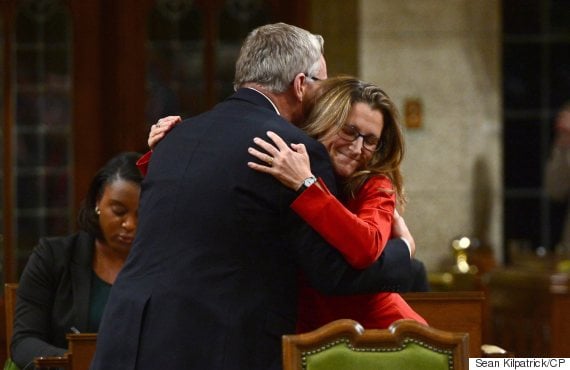 According to Innes, CETA represents a possible annual increase of $1.5 billion in agricultural exports to the European Union.

The opportunity to lower 94% of all agricultural tariffs into the EU comes at a time where Canada seems very focused on trade diversification and not having such a heavy reliance on trade with the U. S.

Not everyone in the EU is ecstatic with CETA.  Farm associations have expressed displeasure with the possibility of Canadian beef and pork flooding into the Europe. Canadian durum growers know all to well how Italy is questioning whether it will ratify CETA based on Italian speciality food protectionism and an adversion to Canada’s use of glyphosate as a pre-harvest desiccant.

With the amount of wealth in the EU and the continued struggles to complete NAFTA, Canadian farmers see market access into Europe as an option that is a needed piece of the trade puzzle.