The federal environment minister made a rare and unpublicized visit to a grain farm in Manitoba on Thursday.

Minister Catherine McKenna dropped in at Curtis McRae’s farm north of Winnipeg near St. Andrews on her way back from a funding announcement for Lake Winnipeg in Gimli.

A film crew arrived about an hour before the minister, who was running late, says McRae. The crew told him she would only have about 20 minutes for their visit.

The minister ended up staying for an hour and half, he says.

“We talked about how agriculture and the environment have to be friends and work together,” he says, in the interview below. “Friends working together means they should not be trying to restrict us but rather help us in doing better at what we’re doing.”

McRae, who serves as a director for the Manitoba Canola Growers Association and Canola Council of Canada, says he emphasized the importance of ensuring Canadian farmers have access to the latest plant technology.

“I want to have protection of our biotechnology, because I feel that’s huge in how we move forward in improving the environment.”

McKenna’s tweet from his farm reflected their conversation about the importance of genetically engineered crops and biotech, in general.

McRae farm is a multigenerational enterprise in Manitoba that is taking biotechnology initiatives that are smart investments for the #environment and for the #economy pic.twitter.com/YLmxZM2hr0

They also discussed fertilizer stewardship and precision farming technology with Wade Barnes, CEO of Farmers Edge, whose company was involved in facilitating the minister’s visit. (McKenna commended the precision agriculture company in another tweet, here.) 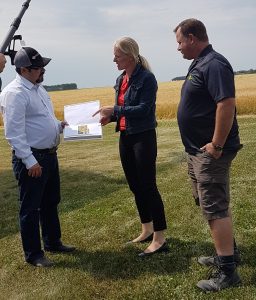 While McRae has previously voiced concerns about the federal carbon tax in media interviews, he says he chose a different approach when speaking directly with the minister on his farm.

“I wanted to just discuss carbon, because I think some of the issue with carbon is they don’t get to see the whole picture. Part of my display was digging up plants…to show not only is there carbon being captured above the soil, there’s a lot of carbon that we’re capturing below the soil,” he says.

At the very least, he’s optimistic the visit will lead to future conversations about agriculture with McKenna and her department.

“No question a lot of learning went on, and hopefully some doors were opened that we can have some further communications…the environment people talking to farmers and agriculture,” he says.