Crude oil shipments by rail in Canada are at record highs and forecast to continue climbing, as oil production has increased with no major expansion in export pipeline capacity.

At the same time, executives for Canada’s two major railways say they intend to maintain rail capacity for grain.

198,788 barrels of oil per day were exported by rail in May, according to new data published by the National Energy Board. That’s up from 193,468 per day in April, which surpassed the previous monthly high of 178,989, set in September 2014, before oil prices tanked. 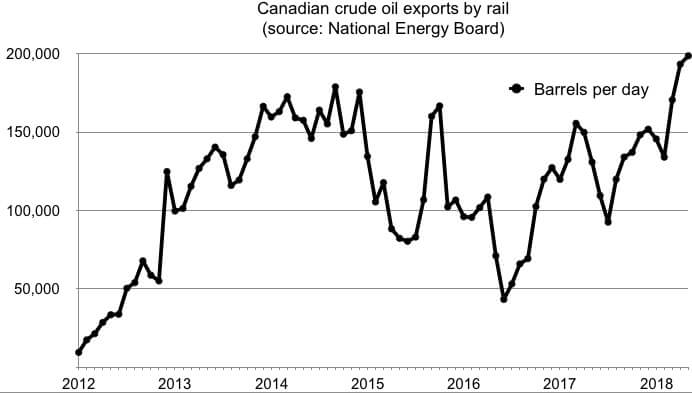 What does this mean for grain?

Long lines of tanker cars certainly illicit concerns among farmers about grain being a lesser priority than oil, but there are mixed views on how moving oil by train affects grain transportation.

During the backlog this past December, David Przednowek, Canadian National (CN) Railway’s director of marketing for grain, described the idea that oil is to blame for reduced grain movement as “one of the biggest misperceptions out there,” noting crude only accounted for about one percent of CN’s book of business at the time.

From a railway’s perspective, oil can be lucrative, but demand has historically been very inconsistent relative to other commodities, making it difficult to allocate resources and make long-term investments in shipping capacity for crude. For this reason, railways have been trying to establish long-term contracts with oil shippers.

While the NEB data shows there’s already been a significant spike in oil movement by rail, both CN  and Canadian Pacific say they expect their oil business to continue growing in the second half of 2018.

That means more oil on the tracks while grain shippers are trying to move the 2018 crop to overseas customers, but CN’s CEO JJ Ruest told analysts on a second quarter earnings call last week that the railway would only add crude business if it doesn’t hurt longer-term customers.

More oil will move on CN trains, Ruest said, “if we are able to generate enough capacity on the network, we’re talking Edmonton going east then going south, and that you generate a capacity such that we don’t short-change the grain industry, the potash industry, the lumber industry…we will move as much crude by rail as we can based on how much capacity is left…”

“Our mission…is to deliver every kernel or seed or whatever it is that’s out there. That’s a big item for CN,” noted CN’s chief operating officer Mike Cory.

CP’s executives say they see oil shipments potentially doubling by the end of the year, but CEO Keith Creel also expressed reluctance to ramp up crude business too quickly when speaking on CP’s second quarter call.

“From a capacity standpoint, the most important thing we’ve got to remind ourselves of, as much as the revenue looks great and I’d love to be the solution for everyone, I’ve got to protect those existing customers. If I bring on additional business, I’ve got to make sure that I’ve got the capacity to reliably control the cost and provide the service that I say I’m going commit to,” noted Creel. “And then, at the end of the day, too, the business case has got be there to justify the capital expense for the investments in the locomotives, as well as the investments in hiring and training people.”

Crude has “certainly presented us an opportunity and an opportunity that we think can span two, three to maybe upward to five years for us,” added CP’s chief marketing officer John Brooks.

Ultimately, CN and CP only have a certain number of engines (in the short-to-medium term) and limited track capacity (in the longer term), so unless there are offsetting efficiencies found elsewhere, increased oil volumes will displace capacity for other goods moving by rail. (That’s why farm groups in Alberta joined the lobbying effort earlier this year to get Trans-Mountain and other crude oil pipelines built.)

So far, the record high oil shipments have taken place outside of the peak grain shipping season, and don’t appear to have hurt grain movement, according to the Ag Transport Coalition’s latest hopper car order data:

Percentage of hopper car orders fulfilled by CN in each week, as reported by the Ag Transport Coalition (Week 1 = week of August 1, 2017)

Percentage of hopper car orders fulfilled by CP in each week, as reported by the Ag Transport Coalition

But harvest is beginning in Western Canada, and grain company demand for trains will soon spike again, as new crop deliveries fill up prairie grain elevators.

As Brooks noted, historically high crude-by-rail shipments are expected to continue for some time. Analysts are expecting rail demand to remain strong for at least the next year or two, as a steep discount on Canadian oil due to pipeline constraints is providing a strong incentive to move Canadian crude south to the Gulf region, whether that’s in a pipe or a tank on steel wheels.

That would be a lot more oil moving by train.

The railways are saying they want to maintain capacity for grain and other commodities, but that promise will certainly be put to the test as increasing demand from oil companies meets the 2018 harvest on the tracks this fall.