Canadian wheat has long been known for its high quality — as a premium wheat for blending into lower quality grain to meet minimum requirements for baking. But how does Canadian wheat stack up when it comes to cost of production, yield, and farmgate prices? Where does Canadian production fit in the context of increasing wheat coming from Russia and Ukraine?

The operational cost competitiveness of Canadian farms is confirmed in benchmark data compiled by the Agri Benchmark Network — a global network of academics and farm advisors — over the last three years. 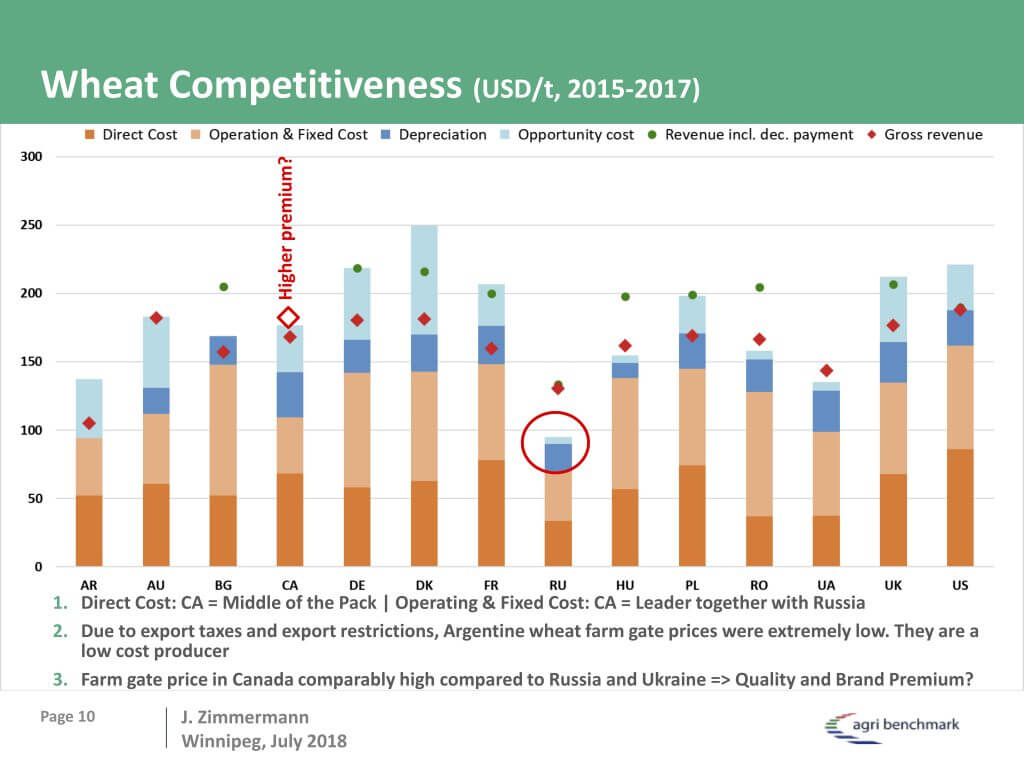 When it comes to operational and fixed costs per tonne, which includes machinery repairs, labour, and capital costs, Canadian wheat producers are on par with low cost producers in Russia and Ukraine, despite paying significantly higher wages (i.e. $3/hr in Russia versus $20-25/hr in Canada) — a testament to the efficiency of Canadian farms.

Direct costs, such as seed, fertilizer, chemical, drying, and irrigation, are a weak spot for North American producers from a cost perspective. German farmers, for example, spend more than two-times as much on nitrogen fertilizer, but produce a tonne of wheat for a lower direct cost (due to higher yields) than producers in Canada, notes Zimmermann.

On yield, Canada is in the middle of the pack, with the UK, Germany and France among the leaders. Russian and Ukrainian wheat yields have surpassed Canadian averages, while Australian production lags the other key growing areas due to a lack of rainfall. 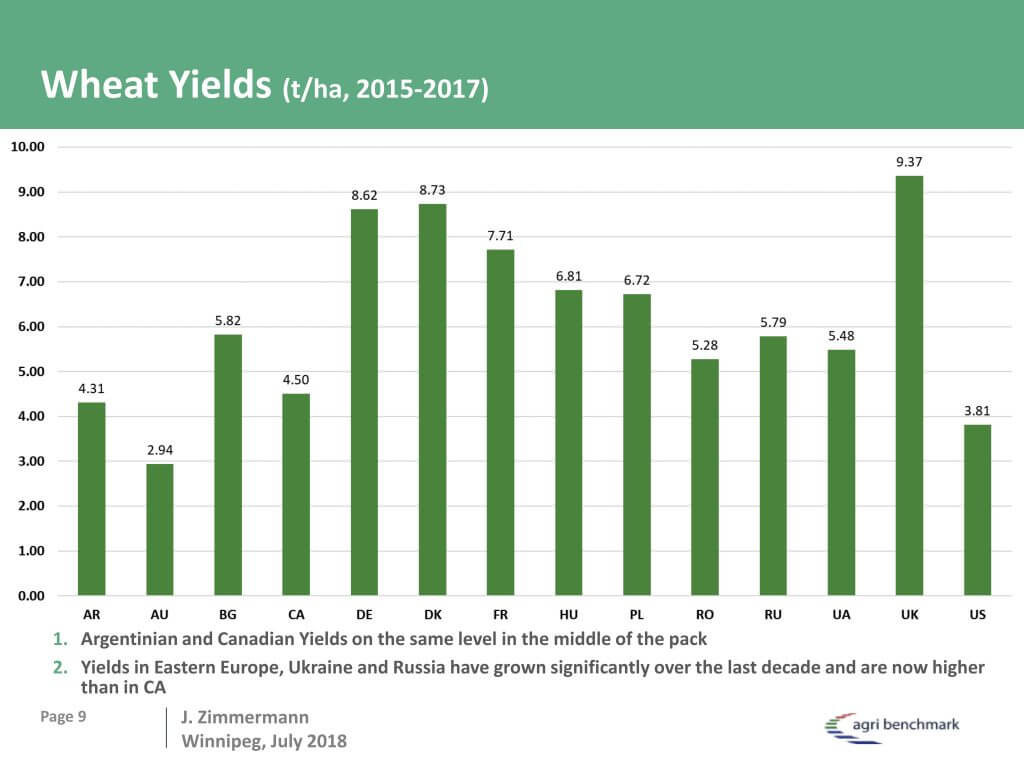 As for returns, EU farmers benefit from subsidies and the highest farmgate prices in the world, but also have the highest costs for growing wheat. Russian wheat producers are the clear leaders in profit margin. Farmgate prices in Canada are almost high enough to cover opportunity costs — a slightly better situation than wheat producers in the U.S., who are near breakeven on covering direct and operational/fixed costs alone.

The price data also shows Canadian producers are paid more for their wheat than producers in Russia and Ukraine, showing the value of the premium quality more than offsetting the transportation cost of getting grain to port and to export customers.

While Russian wheat yields have been climbing, the percentage of the crop with 13-plus percent protein wheat has trended lower in recent years, with the majority falling between 11.5 and 13 percent.

“They’re using their advantage of their location, their low transport costs to North African and Middle-Eastern markets, and they’re trying to cater to the needs of these countries, the bulk of which is lower quality wheat,” notes Zimmermann. 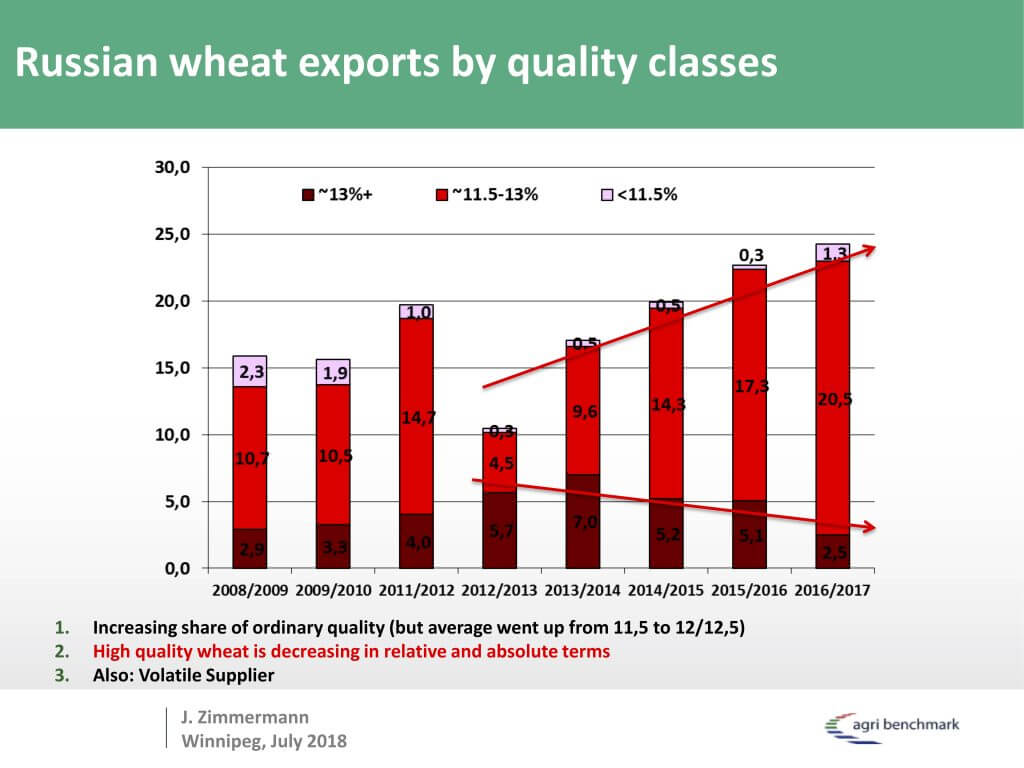 Since Canadian production can’t compete with Russia on production or transportation costs, Zimmermann says the benchmark findings support the Canadian industry’s focus on growing and selling high quality wheat for premium prices, while remaining efficient at the farm level.

“We can remain agile to these things because we’re all family farms. Over in Russia these are often big structures where management decisions take a long time to hit the actual ground, and they need to a lot of hierarchical steps to get that executed, whereas here if a farmer makes a decision in the morning he is basically doing it in the afternoon,” he says. “Everything that involves a lot of management is our long-term strategic advantage.”