Soybeans in parts of Western Canada have started to show visual signs of nitrogen deficiency due to poor nodulation and dry conditions.

The symptoms are showing up as nitrogen uptake is about to peak, with the crop heading into the critical pod-filling stage.

Nodulation failure appears to be more prevalent in fields where soybeans have never been grown before, explains Laryssa Stevenson, production specialist for western Manitoba with Manitoba Pulse and Soybean Growers (MPSG).

The issue of poor nodulation was one of the topics she discussed with growers at the Crops-A-Palooza field day hosted by Manitoba commodity groups in Portage la Prairie last week.

“It’s been worse than previous years because it’s been very dry. We had very dry seeding conditions, so some of our more vulnerable inoculant formulations, like liquid inoculant, may have desiccated,” she says, noting granular inoculant is generally more robust in moisture extremes and acidic soils.

In addition to the earlier issues with inoculant, dry conditions through the growing season have also slowed the nitrogen fixation process in plants with nodules, further contributing to the deficiency.

In some cases, residual nitrogen in the soil has carried poorly-nodulated soybean plants this far, but a 40 bu/ac soybean crop typically requires 180 to 230 pounds of N per acre — much more than is available in the soil alone. (continues below)

MPSG’s Laryssa Stevenson discusses the reasons for nitrogen deficiency, and how to decide whether a rescue treatment is justified in this Soybean School episode filmed (in the rain, ironically) at Crops-A-Palooza in Portage la Prairie, Man. last week:

If there are less than 10 nodules per plant, a rescue nitrogen treatment should be considered, says Stevenson. 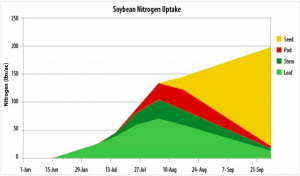 The general recommendation for rescue N applications in Western Canada is 50 pounds per acre at the R3 (early pod) stage. (The recommendation in Ontario is earlier — at first flower, if soybeans are pale green and N-deficient.) If possible, the fertilizer should be applied just before rain and directed below the canopy to prevent leaf burn.

“Peak nitrogen uptake in soybeans happens between R4 and R5 when the soybean crop is taking up around 4.5 pounds of nitrogen per acre per day, so we want to make sure we get that nitrogen on just before that pod-filling period,” she explains.

Research conducted by IHARF in Saskatchewan in 2017 showed an average 18 percent yield increase when UAN was dribble-banded on the soil surface at R2-R3 (early pod fill) stages in soybeans where no granular inoculant had been applied, however yields were still lower than in soybeans with good nodulation.