The Quantum air drill features a stronger, simpler frame design, a new air system, and more row spacing options than previous models, according to the company.

“We’ve thought about this product from the perspective of the dealer and the customer in terms of serviceability, low maintenance, and long lifespan,” says president and CEO Ben Voss, in the video below. “You need a product that can be reconfigured and used with limited complexity. That’s really what the problem is with most air seeders these days. They’re very complicated and customized.” 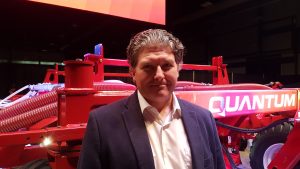 One the main innovations with the Quantum is in the way the frame is constructed — Morris’ engineers have used a tube welding design (see photo below) that the company says makes it significantly stronger than traditional butt joint welds and fish plating used on other toolbars.

“All the cross members, the tubes running front to back are running through the tubes running lengthwise, and when they run through, they’re welded on two sides, and that makes it 154 percent stronger,” says Voss. “We also think by getting rid of fishplates, it takes a lot of the complexity out of the way the frame is laid out.”

As a result, he says there’s more room for flexibility in row spacing, with 10″, 12″, and 15″ options. The drill is available in widths ranging from 40′ to 70′, all of which have a standardized frame, hitch and tires. 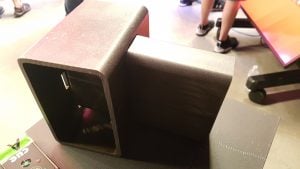 As Voss explains, the Quantum also features Morris’ new ShieldCore carbide-coated openers, which are manufactured using a proprietary robotic welding technology. The row units have improved trash flow geometry and a single-bolt clamping system which allows it to be attached without U-bolts, he says.

Compared to a Contour drill with the same width and row spacing, the Quantum has 76 per cent fewer parts in it, says Voss.

“Less bolts, less hardware, less clamps, less U-bolts. So if there are 1,000 parts in a Contour drill, there are 246 in a Quantum, to give a comparison,” he says. “That’s a pretty astounding accomplishment.”