McDonald’s Canada says it will soon become the first company in Canada to serve Canadian beef from farms and ranches that are “certified sustainable.”

The restaurant chain will introduce the sustainability claim with its Angus burger lineup, and is expecting to sell more than 20 million Angus burgers sourced according to these standards in the next 12 months.

The introduction of the sustainability standard at the company’s 1,400 restaurants across the country marks a major milestone in a process that began four years ago with the establishment of the Canadian Roundtable for Sustainable Beef (CRSB.)

The CRSB brought together representatives from academia, government, food and agricultural businesses, producer associations, processors like McDonald’s supplier, Cargill, retail and foodservice, as well as NGOs like the World Wildlife Fund U.S., Nature Conservancy of Canada and Ducks Unlimited Canada.

Together the group established standards that include more than 60 indicators across five principles for beef sustainability (natural resources; people and community; animal health and welfare; food; and efficiency and innovation). 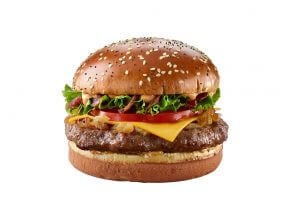 McDonald’s says it will introduce the ‘certified sustainable’ label with its Angus burgers. (source: McDonald’s Canada)

These standards — for example, managing grasslands and grazing in a way that maintains or improves soil health and protects watershed areas — are upheld by on-site certification audits. A pilot project with McDonald’s that was completed in 2016 included 121 ranches, 34 backgrounding operations, 24 feedlots, two beef processors and one patty plant. The framework was launched in December 2017.

“Consumers are increasingly inquisitive about the food they’re eating and want to know it was produced in a socially responsible, economically viable and environmentally sound manner,” noted Cherie Copithorne-Barnes, rancher and chair of the CRSB. “As we all strive to make continuous improvements, it’s important to recognize achievements made along the way. We celebrate with McDonald’s Canada on their significant progress and acknowledge their role in supporting the establishment of a clear vision for beef sustainably.”

“This is a big step in our beef journey – not just for McDonald’s Canada and the Canadian beef industry, but around the world,” said John Betts, president and CEO, McDonald’s Canada, in the announcement on Thursday. “Without the support from the industry and the incredible work Canadian ranchers do every day, beef sustainability in Canada would not be possible. This partnership, combined with McDonald’s scale, is creating change and encouraging responsible beef production for years to come that will benefit all Canadians.”

The company says it looks forward to growing the volume of available beef sourced from CRSB-certified sustainable operations, as more producers and other companies join the program.