The practice of split-applying nitrogen through the growing season has been increasing throughout U.S. midwest corn states and in Eastern Canada. In Western Canada, about 20 percent of corn growers in Manitoba have adopted the in-season practice, according to newly-released results of a survey conducted by the Manitoba Corn Growers.

In this episode of RealAgriculture Corn School, Manitoba Agriculture soil fertility specialist John Heard explains they found growers use at least 13 different ways of timing application and placing nitrogen fertilizer throughout the season:

Fall-applied nitrogen can still be an effective practice for growers in that province, he says.

“Fall nitrogen is still a very efficient way for us to handle nitrogen,” says Heard. “We’ve had a dry fall and a dry spring and we would expect in a year like this that any fall-applied nitrogen is just as efficient as spring-applied.”

Story continues after the video.

Heard notes that farmers increasingly have the ability and the equipment to adopt split nitrogen application, but based on research work at 10 sites in Manitoba there is no yield advantage to support this management change. 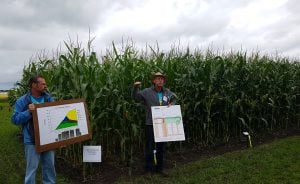 “We might expect advantages in those years when we experience early-season losses, when the plant is not using much nitrogen,” explains Heard. “If we have all up-front nitrogen, that nitrogen is vulnerable to loss. If we have those conditions and farmers have the option to supplement in-season, that’s where we might expect those systems to shine.”