Keystone Agricultural Producers’ board of directors has appointed Bill Campbell as the organization’s new president, after Dan Mazier stepped down earlier this month to seek a nomination for the 2019 federal election.

Campbell, who served as a vice-president for Manitoba’s general farm group for the last year and half, has a mixed farm near Minto, Manitoba, with around 2,600 acres, including 1,700 acres seeded to annual crops and a purebred Limousin cattle operation.

“I accept the presidency with great enthusiasm, and look forward to engaging with our grassroots farmer membership, as well as with industry stakeholders and government,” he says, in a statement shared by KAP on Tuesday. 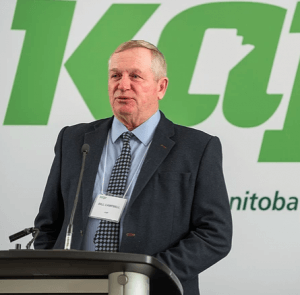 “There is a lot for our organization to do,” Campbell continues. “We need to look down the road five to 10 years to see where agriculture fits in the Canadian economy. At the same time, we need to look at shorter-term issues that are affecting our industry today.”

Mazier was serving the final year of the maximum four year term for KAP’s president position. He resigned in early July to seek the Conservative nomination in his home riding of Dauphin—Swan River—Neepawa. (Current MP Robert Sopuck announced in early May that he will not be running again in the next federal election.)