The introduction of protein price discounts by at least one soybean buyer in Western Canada this past winter has left soybean growers wondering what can be done to ensure Prairie soybeans are high enough in protein content.

“The big thing is control the weather,” he jokes. “The areas that had the lowest protein content are those sites that had the least amount of moisture during the July-August time period.”

Dry conditions may cause nitrogen-fixing nodules on the roots to dry off prematurely, resulting in reduced nitrogen availability during the pod-filling stage, says Lange, in this Soybean School episode.

Looking at protein data from variety trials across Manitoba, there’s very little difference between varieties within each site (generally within 1%.) There are greater differences when you compare protein levels at different locations (up to 5%), which indicates weather conditions are a more significant factor than variety.

“Moving forward, there’s really no magic solution for this. The best way to look at it is: do what you’ve been doing in the past. Pick the appropriate variety based on growing conditions, maturity, and look at varieties that have good IDC tolerance,” he says.

In the long run, genetics could be used to boost protein if breeders place an emphasis on protein content, but there doesn’t appear to be a significant difference between herbicide-tolerant varieties that are currently available, as they were developed with yield and maturity in mind. (Conventional varieties tend to have higher protein, which shows there is genetic potential to raise levels.)

As for in-season management, “there are really no quick fixes,” says Lange.

“You can’t spray something on it to increase your protein. You can’t add more inoculant in spring, because adding more inoculant will give you more nodules, but if you have a year where it gets dry again, it won’t make much difference.”

In 2011, Lange was involved in a project looking at rescue applications of nitrogen on non-nodulated soybeans. The research showed protein increases are possible when applying high rates of N at flowering and pod-fill, but even with 100 lb N/ac, protein content was still lower than what’s commonly achieved with good nodulation.

Finally, to avoid unwanted surprises at delivery, it’s also recommended that growers ask buyers about protein content requirements prior to entering a contract. 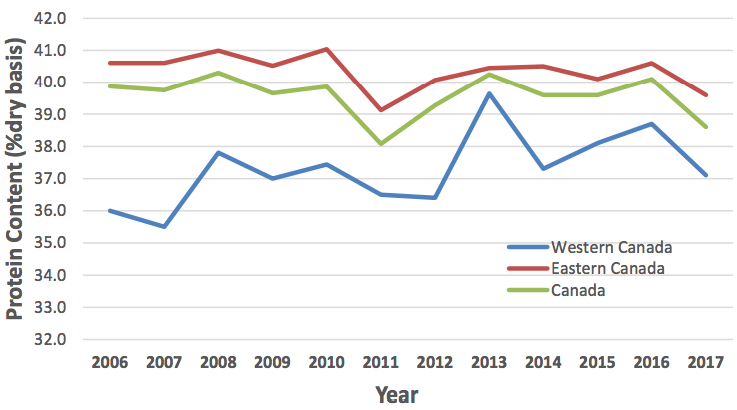