At one time, there was a thought that wild pigs could be part of a livestock diversification strategy for Saskatchewan farmers and ranchers. After several farmers gave it a try in the early 90s, fences were cut loose and a new pest problem began within the province.

There is still debate over the severity of the wild pig issue, but the damage that they can cause to pasture and farmland is undeniable. Growing to over 800 pounds, wild pigs multiply quickly, eat almost anything, and are incredibly difficult to hunt.

Dr. Ryan Brook, associate professor with the University of Saskatchewan, is leading research within the province to address the wild pig issue. He feels strongly that the problem does exist (there is some disagreement), and says that Saskatchewan is lacking a plan for dealing with the wild pig populations. The population is only going to grow and spread across the province.

Over the period 2000-2017 the average annual increase in wild pig range in Canada based on HUC9 level watersheds was 24,941 km². The majority of this was in Saskatchewan. pic.twitter.com/7ZXH1Gm3Bq

Citizen scientists are contributing so many great trail camera images of Wild Pigs across Canada. As the photos keep accumulating, the scope and scale of this problem becomes more clear @usask @agbio @SK_StockGrowers

There are some huge animals out there. pic.twitter.com/CVZQhNS93u 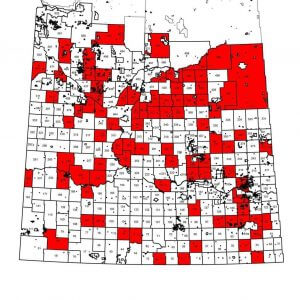 Areas in red have reported wild pigs. The situation is concerning for many farmers and ranchers.

Several ranchers expressed their concern over the problem following Brook’s presentation at the Saskatchewan Stock Growers Association AGM at Swift Current this week.

One rancher rose to the mic and passionately stated, “eradication is the only option, the absolute only option to wild pigs.”

As mentioned, farmers and ranchers hunting the wild pigs will not sufficiently reduce the population Hunting can actually lead to dispersing the populations over a larger geography.

To get a better understanding of the issue, have a listen to Shaun Haney’s discussion with Dr. Ryan Brook (below) regarding his presentation to the Saskatchewan Stock Growers Association.