The Canadian government intends to table legislation to ratify the Comprehensive and Progressive Agreement for Trans-Pacific Partnership (CPTPP) before the House of Commons rises for summer.

International Trade Minister François-Philippe Champagne appeared before the House trade committee on Tuesday morning, where he confirmed the government’s plan to bring forward the bill to implement the Pacific trade deal.

“We also intend to promptly proceed with ratification,” said Champagne, without saying when he expects Parliamentary approval and ratification will happen. 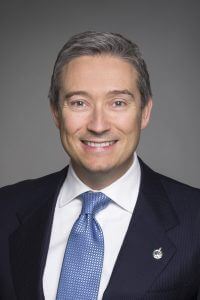 The House is currently slated to rise for summer on June 22.

When asked whether the Liberals will introduce time allocation to move the legislation forward, the minister said they intend to “respect the Parliamentary process as it should be.”

Agriculture groups have been urging the government to move ahead with ratifying the deal that was signed in Chile in early March, as it will take effect when six of the 11 signatories have ratified it domestically.

“We do want to be in the first wave of countries,” said Champagne. “We have heard from many sectors of the Canadian economy that they would want Canada to be part of that first grouping so we are sure to benefit from the first-mover advantage, and I’m determined to look forward to that.”

In a letter to Champagne last week, the Canadian Agri-Food Trade Alliance (CAFTA) said a race is on for CPTPP members to ratify the deal. Mexico was the first country to cross the finish line in April.

“Japan’s Lower House recently passed the bill paving the way for ratification before the end of June. Australia tabled the treaty in its Parliament and vows to expedite ratification. Malaysia and Chile are both expected to ratify quickly. New Zealand, Singapore, Peru, Vietnam and Brunei are all working to ratify the CPTPP by the fall,” wrote CAFTA.

Champagne told the trade committee that Canada is talking with other member countries “to see that we are in the first wave.”

The actual CPTPP text was tabled in the House of Commons in late May, clearing the way for legislation to implement the 11-country trade deal.

CPTPP text tabled in the House of Commons

Liberals missing out on an easy win by not ratifying CPTPP