Just weeks after Canadian National Railway (CN) announced an order for 1,000 new hopper cars, CP unveiled plans on Thursday to spend more than $500 million on around 5,900 high-capacity grain cars over the next four years. The initial order will include 1,000 cars from National Steel Car in Hamilton, Ontario. CP says it expects more than 500 of these cars will be in service by the end of 2018.

“We know farmers depend on us to transport their product efficiently, safely and reliably to market. It’s the largest sector of CP’s business by revenue, and we’re committed to continuous improvement for the benefit of our customers and the North American economy. These new railcars will revitalize our fleet and help cement our status as an industry leader in grain transportation for decades to come,” says CP President and Chief Executive Officer Keith Creel in a news release.

Echoing their counterparts with CN, officials with CP say their hopper car investment is “made possible” by changes to the formula for the Maximum Revenue Entitlement (MRE) for grain in C-49, the Transportation Modernization Act, which received royal assent on May 23.

The MRE formula, which determines how much railways can charge for shipping grain, will now independently account for investments in grain handling made by CP and CN. Previously, the MRE math used a combined investment factor between both CN and CP, which made it difficult for an individual railway to pass on its investment cost, and thereby reduced the incentive to invest.

CP had indicated it would be investing in grain handling if C-49 passed with this “bifurcation” clause — the change to the MRE. Speaking at the Canadian Global Crops Symposium in Toronto back in March, CP’s Murray Hamilton referred to the deployment of $500 million for new hopper cars being tied to the passage of C-49.

The acquisition of approximately 5,900 cars will allow the railway to completely remove its low-capacity hopper cars, including all Government of Canada cars, from its fleet, says CP.

The new 5,431 cubic foot cars can handle 15 percent more volume and 10 percent greater load weight than the cars that will be retired, while on a shorter frame that allows for more cars in a train of the same length. The new cars also feature a three-compartment design, which can be loaded and unloaded more efficiently than the four-pocket government cars, notes CP. 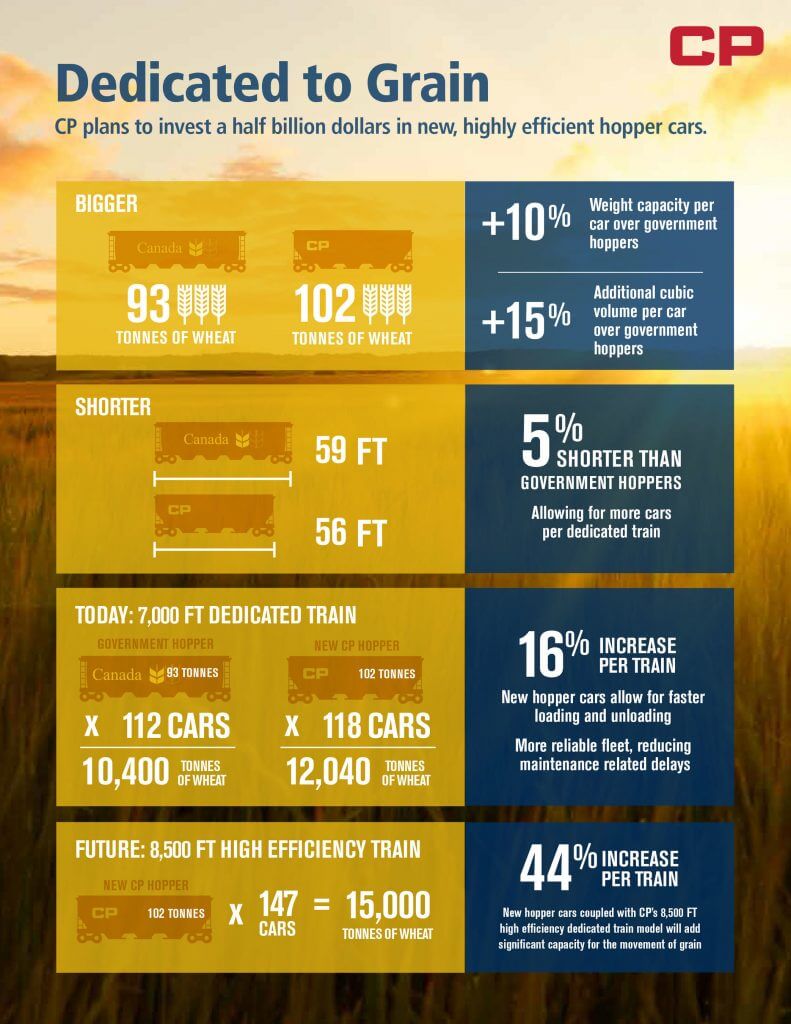 With the shorter cars added to the fleet, CP says it will be able to fit 118 cars within the current 7,000 foot, 112-car length — a 16 percent increase in capacity per train. The railway is working toward an 8,500 foot model for all its dedicated grain trains, which would include 147 of the new higher-capacity cars.

Both CP and CN are ordering their new cars from National Steel Car in Hamilton.

“This newly designed and manufactured National Steel Car equipment will provide huge benefits to CP, our economy, and the entire grain delivery supply chain,” says Gregory J. Aziz, Chairman and CEO of National Steel Car, noting the company will have the opportunity to hire several hundred employees as a result of CP’s investment.

CP says it’s also adding new employees and engines to its network, with more than 700 employees at various stages of training company-wide, and 100 locomotives, including remanufactured General Electric machines, slated to join the company’s fleet before the end of summer.